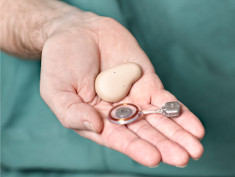 The implant is slightly less than six centimetres long; © Chalmers University of Technology

Functionally deaf patients can gain normal hearing with a new implant that replaces the middle ear. The unique invention from the Chalmers University of Technology has been approved for a clinical study. The first operation was performed on a patient in December 2012.

With the new hearing implant, developed at Chalmers in collaboration with Sahlgrenska University Hospital in Gothenburg, the patient has an operation to insert an implant slightly less than six centimetres long just behind the ear, under the skin and attached to the skull bone itself. The new technique uses the skull bone to transmit sound vibrations to the inner ear, so-called bone conduction.

“You hear 50 percent of your own voice through bone conduction, so you perceive this sound as quite natural”, says Bo Håkansson, of the Department of Signals and Systems, Chalmers.

The new implant, BCI (Bone Conduction Implant), was developed by Bo Håkansson and his team of researchers. Unlike the type of bone-conduction device used today, the new hearing implant does not need to be anchored in the skull bone using a titanium screw through the skin. The patient has no need to fear losing the screw and there is no risk of skin infections arising around the fixing.

The first operation was performed on 5 December 2012 by Måns Eeg-Olofsson, Senior Physician at Sahlgrenska University Hospital, Gothenburg, and went entirely according to plan. “Once the implant was in place, we tested its function and everything seems to be working as intended so far. Now, the wound needs to heal for six weeks before we can turn the hearing sound processor on”, says Måns Eeg-Olofsson, who has been in charge of the medical aspects of the project for the past two years.

The technique has been designed to treat mechanical hearing loss in individuals who have been affected by chronic inflammation of the outer or middle ear, or bone disease, or who have congenital malformations of the outer ear, auditory canal or middle ear. Such people often have major problems with their hearing. Normal hearing aids, which compensate for neurological problems in the inner ear, rarely work for them. On the other hand, bone-anchored devices often provide a dramatic improvement.

In addition, the new device may also help people with impaired inner ear. “Patients can probably have a neural impairment of down to 30-40 dB even in the cochlea. We are going to try to establish how much of an impairment can be tolerated through this clinical study”, says Bo Håkansson.

If the technique works, patients have even more to gain. Earlier tests indicate that the volume may be around 5 decibels higher and the quality of sound at high frequencies will be better with BCI than with previous bone-anchored techniques.

Now it’s soon time to activate the first patient’s implant, and adapt it to the patient’s hearing and wishes. Then hearing tests and checks will be performed roughly every three months until a year after the operation.

“At that point, we will end the process with a final X-ray examination and final hearing tests. If we get good early indications we will continue operating other patients during this spring already”, says Måns Eeg-Olofsson.

The researchers anticipate being able to present the first clinical results in early 2013. But when will the bone-conduction implant be ready for regular patients?

“According to our plans, it could happen within a year or two. For the new technique to quickly achieve widespread use, major investments are needed right now, at the development stage”, says Bo Håkansson.

More about the Chalmers University of Technology at: www.chalmers.se