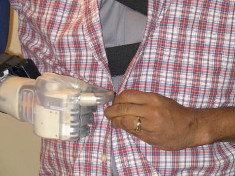 Amputees with a new prosthetic arm must
learn how to use it to perform everyday
tasks; © Linda Resnik, PVAMC/Brown

Amputees with a new prosthetic arm must learn how to use it to perform everyday tasks that were once second nature. Taking off a shirt becomes a conscious, multistep effort: grasp it, lift it over the head, pull arms through the sleeves, place the shirt on the table, let go of the shirt.

In the best cases of treatment, patients work with teams of doctors, prosthetists, and therapists to learn how their new limbs can help them regain function and quality of life. But clinicians have had few tools to assess whether that crucial teaching/learning process is going well, because of a lack of standardized measurements to use with adults with upper limb amputations.

To change that, a research team has unveiled a new index that clinicians can use to assess their patients' progress. "Patients can't just take a prosthesis out of the box and start using it skillfully," said lead author and physical therapist Linda Resnik. "The upper limb is used to perform so many types of tasks. Patients need training to make the most of an upper limb prosthesis. Physical and occupational therapists train people to use adaptive equipment and prosthetic devices, – teaching them strategies to accomplish functional tasks, and guiding them in therapeutic exercises and activities. We need measures to let us know if our patients are improving the way that we expect them to. When they get a new device, what are the benefits? Are they able do more with it?"

The Activities Measure for Upper Limb Amputees (AM-ULA) provides standardized methods and criteria for clinicians to grade patients' performance, speed, and skill using any kind of prosthetic arm to do 18 everyday tasks. Tasks on the AM-ULA include not only putting on and removing a shirt, but also serving soda from a can, combing hair, tying shoes, and using a spoon. They are the kinds of tasks adults need to be independent in caring for themselves and others. Resnik and the team tested the metric with 49 veterans.

"This particular tool, because of the grading criteria that we use, considers aspects of movement quality that might not be picked up in a self report," she said. "We look at the amount of body compensation used to perform a task – how much bending or use of other more proximal joints is involved in an activity. That's important, because we know that upper limb amputees often develop problems in their neck and back." Resnik's team built the new measure much like a prosthetics engineer builds an arm: they designed a prototype based on tasks from other measures, and refined it iteratively using feedback from content experts.

One of the key methods of refining the metric and ensuring its reliability was determining whether two independent raters, observing the same patient performance, arrived at the same ratings or strongly disagreed. The researchers also determined when raters differed with themselves when the test was administered twice within a short period of time. Originally the measure included 24 tasks, but ultimately six were dropped because the independent raters came to ratings that were too different, too often.

The researchers also validated the measure by making sure that the results made sense, based upon what was known clinically. For instance, scores of the AM-ULA were highest for people with amputation of the hand, lower for those with amputation above the elbow, and lowest for amputees with amputation at the shoulder.

To help clinicians interpret changes in AM-ULA scores in individual patients, the team analyzed the statistics to calculate how much of a change in the overall score could be considered more than just natural "noise" in the data. For example, a patient whose scores change more than 3.7 points between sessions is likely to have truly changed, that change exceeds random error of measurement.

"Outcome measures are needed in all areas of health care, but particularly so in the area of prosthetic rehabilitation," Resnik said. "High tech prosthetic devices have great promise to help people regain function, but the costs for myoelectric and microprocessor prosthetic devices are substantially higher than those for simpler, body powered devices."


- More about Brown University at: www.brown.edu