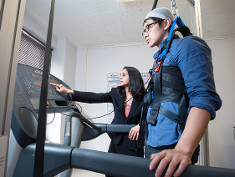 A University of Illinois at Chicago researcher will test whether brain stimulation combined with gait training can improve patients' ability to walk after a stroke, under a $1.5 million grant from the National Institute of Child Health and Human Development.

"After a stroke, almost 60 percent of people are not able to walk independently in their community – and there are currently six million stroke survivors in the U. S.," says Sangeetha Madhavan, assistant professor of physical therapy and director of UIC's Brain Plasticity Lab. "Even when they can walk, they are often really slow and are not fast enough to cross a road safely before the pedestrian lights change. Improving their ability to walk would have an enormous impact on their quality of life."

Madhavan and her coworkers study how the brain changes in response to stroke, and how to tap into the brain's potential to help in a functional recovery.

Scientists approach rehabilitation in different ways, she said, but most commonly with a kind of bottom-up approach, by training muscles and re-teaching walking, and then hoping that the brain will relearn how to control those functions.

Madhavan's approach is top-down, dynamically stimulating the brain to make it more responsive to the therapy the patient will receive.
She will use a technique called transcranial direct current stimulation, or tDCS, which passes a very low level of current through the motor area in the brain that controls the legs.

People 50 or older who have had a stroke will be enrolled in the study and receive gait-training on a treadmill. The treatment group will receive tDCS prior to gait training. Electrical stimulation will be administered in combination with motor training of the ankle, as a major problem for people trying to walk after stroke is an inability to flex the ankle on their affected side.

The control group will receive only the gait training, three times a week for four weeks. Subjects will be evaluated at the end of the four weeks and again three months later. Their walking speed and other clinical and quality-of-life measures will be assessed.

In addition, the researchers will examine the physiological function of the cerebral cortex to see if brain plasticity changed after training. Madhavan said they use use noninvasive tools, such as transcranial magnetic stimulation, to compare the excitability of the affected and unaffected areas of the brain.

People with stroke differ in how they respond to therapy, Madhavan said, and the transcranial magnetic stimulation technique "gives us a way to understand why one individual changes differently from another."