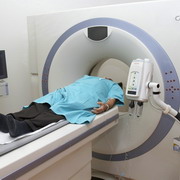 In most centres CT scans are
readily available;
© panthermedia.net/picsfive

New research from the University of Calgary's Hotchkiss Brain Institute (HBI) shows that using a CT (computerised tomography) scan, doctors can predict if patients who have had a transient ischemic attack (TIA) or minor stroke are at risk for another more severe stroke.

This vital information can help doctors decide if stronger medications should be used to prevent future episodes, or if a patient can be safely sent home.

Currently, doctors can use a brain MRI (magnetic resonance imaging) scan to predict if a TIA patient is at high risk for a second stroke. Unfortunately however, MRI machines are not immediately available for most of Canada's population. In most centres, including rural hospitals, CT scans are readily available. This study sought to determine whether a CT scan would be as effective at predicting stroke risk as MRI.

"Many physicians may not have access to an MRI machine to see what is happening in the brain," says Shelagh Coutts, lead author of the study. "Therefore, this study could allow medical interventions to be more widely available than in just the specialised centres that have access to MRI."

In order to assess stroke risk, Coutts and colleagues used an injection of dye to visualise the blood vessels from the heart all the way to the brain. This test is called a CT angiogram, which can easily be administered as part of a routine CT scan. The researchers found that patients who had evidence of blockages or narrowed vessels on their CT scans were at high risk for a recurrent stroke. Further, they found that the CT angiogram scan was able to predict the recurrence of stroke with the same accuracy as an MRI.

Shirley Christensen, 79, suffered an episode of transient speech disturbance and was diagnosed with a TIA, two weeks ago. She was able to identify the onset of her symptoms and sought medical help. Doctors at the Foothills Medical Centre's Calgary Stroke Program were able to use a CT scan to determine that her risk of another stroke was very low and she was released from hospital.

"I am glad I was able to be released and come back at a later date for an MRI scan," she says. Previously physicians would have admitted her to hospital for further investigations. This work allows low-risk patients to be managed safely at home rather than being admitted to hospital, which has the added benefit of reducing strain on the healthcare system.

"Even in centres that have MRI machines, there are often delays in getting patients into a scan. This research has an immediate impact and lets us use readily accessible tools to help patients," says Coutts.


- More about the University of Calgary at: www.ucalgary.ca