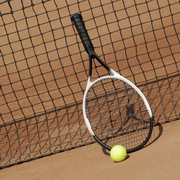 Wheelchair Tennis is one of 20 sports
at the London 2012 Paralympic Games;
© panthermedia.net/JCB Prod

The summer of tennis is about to get even hotter with the new-look Australian Wheelchair Tennis Tour on the calendar for January 2012.

Tennis Australia has partnered with the Australian Paralympic Committee and existing tournaments to make this series possible and with the London 2012 Paralympic Games just around the corner, this new tour is set to attract the world’s best players who will be chasing valuable Paralympic qualification points and a prize purse of $150,000.

“The Australian Wheelchair Tennis Tour will provide a golden opportunity to watch world-class athletes compete on our doorstep, in what is one of the most exciting Paralympic sports.
“We are delighted to support Tennis Australia in establishing this outstanding initiative,” Mr Hellwig added.

The Australian Wheelchair Tennis Tour will roll into action this January, starting in Brisbane (4-8 January) followed by Adelaide (10-13 January) Melbourne (15-18 January) and Sydney (19-23 January) before returning to Melbourne for the invitational Australian Open (25-28 January).

This is not the first year that wheelchair tennis tournaments have been run in the lead-up to the Australian Open but it’s the first official tour that offers increased prize money and ranking points for players, as well as world class playing venues and tournament status upgrades.

“The creation of this upgraded Aussie Tour is one of the most exciting opportunities we, as a wheelchair tennis community, have seen in years,” Daniela di Toro, Australian No.1 women’s wheelchair player said.

“As the perfect lead up to a Grand Slam event it will no doubt draw all the top players to our shores but more importantly with the London Paralympic Games only a year away, it offers all Aussie wheelchair tennis players a genuine opportunity to compete for big points and prize money in what has become the most integrated section of the Wheelchair Tennis Tour in the world,” di Toro added.

“The new tour for 2012 will encourage the best players from around the world to compete and increase the level of International competition for Australian players,” said Greg Crump, Tennis Australia National Wheelchair Tennis Coach.