New clinical trial for children with autism to target parents 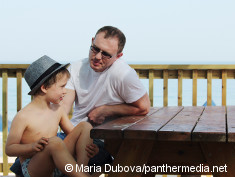 Parents themselves who have a child with autism usually receive only little professional support; © Maria Dubova/ panthermedia.net

In a first of its kind clinical trial, Debra Zand and her team at Saint Louis University, will run an intervention program to help parents address and manage their children's challenging behaviors immediately after being diagnosed with autism.

The pilot program, titled Primary Care Stepping Stones – Positive Parenting Program or PC–SS Triple P, will run at SSM Cardinal Glennon Children's Medical Center's Knights of Columbus Child Development Center. Researchers will recruit 76 parents of children who have been diagnosed with autism spectrum disorder over the past year. The goal of this trial is to help parents identify and manage one or two of their children's specific behavioral problems or developmental issues.

"This program represents a paradigm shift in how pediatricians provide care for children with autism and their families," says Zand, associate professor of pediatrics at Saint Louis University and the principal investigator of the trial. "Parents of children with autism often face tremendous emotional strains, changes in lifestyle and family dynamics associated with caring for their children."

While facing wait lists and delays in treatment for their children, parents themselves receive little professional support in managing their children's behaviors, Zand says. "Little attention is paid to bolstering parental resilience – the dynamic process of being able to parent effectively in the face of having a child with autism."

The intervention aims to work as a rapid response to the problem, which will be implemented right after a child is diagnosed. The ultimate goal would be to improve the child's behavior.

As part of the program, parents will meet a Triple P practitioner individually for four consecutive 30-minute sessions across a month. Once parents have identified problems they would like to address, they can choose from a list of 25 evidence based strategies to manage their child's behavior.

An example of such a situation might be teaching children how to brush their teeth. As children with autism often have texture sensitivities, they may resist brushing. So, instead of asking them to brush their teeth, parents could walk them through the process step by step so they get a chance to learn better. They could start by asking their child – it's time to brush, what should we do now?

Zand says children with autism can be isolated because of their behavior and frequent meltdowns in public places like grocery stores, restaurants and malls. She believes by applying these evidence-based strategies, parents will be able to reduce the particular concerning behaviors, and help their children function like others, so they don't feel left out.

During the course of four weeks, participating parents will track and monitor their child's success and work with the practitioner in the program to apply what they are learning to other behavioral situations.

Zand believes a program like this needs to be part of a pediatric service, where parents can just knock on the door and get the help. "The main focus of the treatment for autism has predominantly been on the child, but we don't realize what we are expecting of parents," Zand says.

Often times, pediatricians teach parents of children with autism to be therapists and help their children with issues. "This program reinforces and encourages parents to just to be parents, and not therapists," Zand says. Through this intervention program, Zand hopes a parent will become more resilient as their child's behavior improves.

Results of this trial will be compared to parents of kids with autism who don't receive such intervention programs.

More about the Saint Louis University at: www.slu.edu