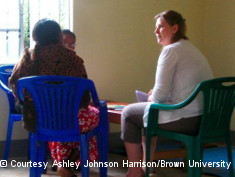 Autism is no stranger to the children of Tanzania. What is rare in the East African nation is access to clinical services, including reliable diagnosis and evidence-based treatments. There is no autism diagnostic measure, for example, validated for use in Swahili, a major language of the region. In a small new study, however, researchers at Brown University and the University of Georgia (UGA) describe a culturally compatible diagnostic approach that they implemented at two sites in the country and found to be effective for making diagnoses.

The approach includes a collection of instruments that lead author Ashley Johnson Harrison adapted and used to conduct diagnostic evaluations with 41 Tanzanian children. The kids came to clinical facilities in the cities of Moshi and Dar Es Salaam because they exhibited abnormal behaviors that were similar to symptoms of autism. Using the diagnostic panel, Johnson Harrison, who does not speak Swahili but who worked with local interpreters, was able to make diagnoses that consistently distinguished kids with autism spectrum disorder from those with other similar disorders.

"Historically in Tanzania, parents that have sought autism diagnoses had to go to other countries to receive those diagnoses," said Johnson Harrison, a former Brown postdoctoral fellow now an assistant professor at UGA, whose travels to Tanzania were conducted as part of Brown's Framework in Global Health Program.

Developing accurate diagnostic techniques, Johnson Harrison said, is important because distinguishing between autism spectrum disorders and other conditions can ensure that children receive proper education and treatment. Over three decades clinicians in the United States have refined diagnostic tools. She said efforts are needed to help Tanzania catch up in the assessment of autism.

"Initially we only identified the most severe cases of autism," said Johnson Harrison, who works under the mentorship of autism expert Eric Morrow in the Department of Psychiatry and Human Behavior in the Alpert Medical School of Brown University and E.P. Bradley Hospital. "Now we can capture individuals who are all across this spectrum. We are able to accurately diagnose individuals who might have previously fallen through the cracks. Where Tanzania is right now is where we were years ago."

The diagnostic protocol Johnson Harrison devised working with Dr. Stephen Sheinkopf, a Brown medical professor and psychologist at Women & Infants Hospital, and Eric Zimak, a former postdoctoral fellow at the Alpert Medical School and E.P. Bradley Hospital, is a blend of established instruments for interviews with parents, observations of behavior and play, and assessments of adaptive functioning and cognition.

She chose instruments that would be culturally relevant or adaptable and piloted this approach with the help of Tanzanian clinicians such as Dr. Karim Manji of Muhimbili University of Health and Allied Sciences in Dar Es Salaam and Brenda Shuma and Anthony Ephraim at the Gabriella Centre in Moshi. For example, the team designed a play interaction from a range of different instruments that included activities familiar to the children. They omitted other activities that would be culturally irrelevant in Tanzania. They selected the Childhood Autism Rating Scale-Second Edition (CARS-2) to help rate child behavior because of the instrument's flexible usage guidelines.

Another advantage of the CARS-2, as well as subtests of the Kaufman Assessment Battery for Children selected for cognitive assessment, is that the behavioral observations and nonverbal cognitive testing don't depend strongly on language.

Meanwhile, as a measure of adaptive functioning, Johnson Harrison and the team chose the Malawi Development Assessment Tool. Although Malawi and Tanzania have important differences, they also have significant similarities. They border and share similar governmental and educational infrastructures.

Johnson Harrison used the protocol, which lasted about two hours, to inform her clinical judgment of whether each patient met the criteria for autism laid out in the Diagnostic and Statistical Manual (DSM-5). After diagnosis, she and colleagues provided the child's parents or guardians with brief information about autism and guidance on using behavioral strategies to improve child skills.

Of the children she tested, she diagnosed 30 as having autism spectrum disorders and 11 as having other "global delay" conditions, such as suspected intellectual disabilities, Down syndrome or other disorders.

Johnson Harrison hopes that the assessment protocol, if supported by further testing, could become a standard approach for clinicians in the country, at least while more rigorous tests used in the West, such as the ADOS-2, can be tailored for Tanzania.