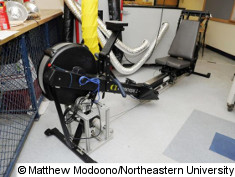 Five Northeastern University student-researchers have retrofitted a rowing machine with an ingenious device, allowing people with paraplegia to exercise without the aid of a trainer.

The group recently filed a provisional patent on the device, which has drawn interest from Concept2, the leading manufacturer of indoor rowers. "A device like ours does not currently exist in the market," said Shah, who recently graduated with her Bachelor of Science in Mechanical Engineering, "and it is in demand by both people with paraplegia and their trainers."

The project grew out of a problem-solving meeting between the young engineers and the physical therapists at the Spaulding Rehabilitation Hospital in Boston. The problem, the physical therapists told the students, was that some two dozen patients living with a medical condition known as spastic paraplegia lacked sufficient motor control of their legs to return to the starting position after taking each stroke on their rowing erg. Trainers had to push patients forward using the handle bar on the back of their seat, applying up to 130 pounds of force to overcome their inability to flex their legs. The solution, both parties agreed, was to design a motorized device that would allow the patients to exercise in their own homes without a trainer's assistance.

The engineers-in-training got to work, developing three potential design concepts. The one they chose to turn into the prototype utilizes a gear system to translate torque from a brushless servomotor to a capstan, which moves the seat.

The design, the students wrote up in their project report, offers two key advantages over the other potential schemes. First, the device remains underneath the erg, which allows the system to operate without interfering with the rower's workout. Second, the servomotor allows for flexibility in speed and torque, which can be changed based on the size and ability of the rower.

It won't be long, the students say, before patients at Spaulding begin using the retrofitted rowing machine and passing along their feedback. Eventually, they note, they'll want to modify more ergs for the facility, the manufacturing cost of which would be approximately $100 per machine.

"We're really proud of what we've accomplished," Shah said, "but we also want to see this work through and solve this problem."
Her engineering strategy, she noted, was informed by her statics and materials science class-work at Northeastern as well as her co-op experience with a trio of cutting-edge companies in the medical device and orthopedics fields.

"I learned things on co-op that I could never have learned in class," Shah explained. Pointing to her prototyping projects with Boston Scientific, she added, "I developed a new level of creativity from having to figure out how to make things work."

Shefelbine echoed Shah, saying that capstone projects represent the culmination of five years of hard work both in class and on co-op. "Capstone forces students to put together everything they've learned in order to build something new," she said.

More about the Northeastern University at: www.neu.edu