In a study of stroke patients, investigators confirmed through MRI brain scans that there was an association between the extent of disruption to the brain's protective blood-brain barrier and the severity of bleeding following invasive stroke therapy. 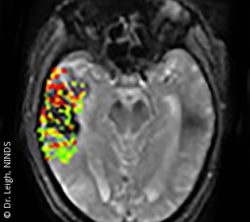 This image combines pre- and post-treatment scans from the same patient. Analysis of the two scans revealed that the area and size of post-treatment bleeding corresponded to blood-brain barrier disruption (shown in green, yellow and red) prior to therapy; © Dr. Leigh, NINDS

The results of the National Institutes of Health-funded study were published in Neurology.

These findings are part of the Diffusion and Perfusion Imaging Evaluation for Understanding Stroke Evolution (DEFUSE)-2 Study, which was designed to see how MRIs can help determine which patients undergo endovascular therapy following ischemic stroke caused by a clot blocking blood flow to the brain. Endovascular treatment targets the ischemic clot itself, either removing it or breaking it up with a stent.

The blood-brain barrier is a layer of cells that protects the brain from harmful molecules passing through the bloodstream. After stroke, the barrier is disrupted, becoming permeable and losing control over what gets into the brain.

"The biggest impact of this research is that information from MRI scans routinely collected at a number of research hospitals and stroke centers can inform treating physicians on the risk of bleeding", said Richard Leigh, a scientist at NIH's National Institute of Neurological Disorders and Stroke (NINDS) and an author on the study.

In this study, brain scans were collected from more than 100 patients before they underwent endovascular therapy, within 12 hours of stroke onset. Leigh and his team obtained the images from DEFUSE-2 investigators.

Ischemic stroke patients are increasingly receiving combination therapy, endovascular treatment along with an intravenous drug known as tissue plasminogen activator (t-PA), to effectively break up clots in the brain. However, bleeding into the damaged brain tissue is a serious complication of both acute stroke therapies. t-PA has been shown to be most effective when given within a few hours of stroke onset, but the treatment window for endovascular therapy is unknown.

"With the growing precision of brain imaging technology, researchers are able to get a detailed look at what is going on in the brain during a stroke. Innovative studies, such as DEFUSE-2, can help patients and their doctors make more informed decisions about medical care", said Walter Koroshetz, director of NINDS.

According to the authors, examining blood-brain barrier disruption on brain images may potentially help doctors identify patients not likely to benefit from endovascular therapy. "It is too early to say how these images will be able to help guide clinical decisions, but they can expand how we think about stroke, especially as we try to broaden treatment options for this disease that can have devastating consequences", said Leigh.

The DEFUSE-3 trial is currently underway, in which researchers will use imaging data to select patients for endovascular therapy up to 16 hours after stroke onset. The patients' recovery will be closely monitored for three months following the treatment.

More about the NINDS at: www.ninds.nih.gov