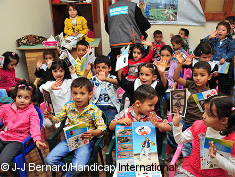 A new petition launched by Handicap International UK is urging the Prime Minister, David Cameron, to ensure that UK Aid helps save the lives and limbs of civilians affected by conflict.

With conflict gripping the Middle East, increasing numbers of civilians are in danger from landmines and explosive remnants of war. These vicious weapons threaten the lives and limbs of innocent civilians in Lebanon, Syria and Gaza, and other countries such as Libya and Afghanistan.

There is an urgent need for risk education, especially for people living in or returning to conflict-affected areas who may be unaware of the hidden danger.

Handicap International UK is calling for UK Aid to help save lives and limbs, by providing life-saving risk education to prevent accidents involving landmines and explosive remnants of war, and by urgently prioritising the clearance of contaminated areas as soon as the situation allows.

With places like Syria, Gaza, and Iraq affected by conflict, new generations of children are growing up with explosive remnants of war around their homes and schools. These indiscriminate weapons can lie dormant for many years, claiming victims long after a conflict has ended. They are a significant cause of disability, instilling fear in whole communities, deepening poverty and acting as a lethal barrier to development. Refugees and people displaced by fighting may be unaware of the hidden dangers, putting them at risk when they eventually return home.

Knowing how to recognise unknown devices such as landmines, cluster munitions, mortars or shells, and how to behave in a life-threatening situation, can significantly reduce the number of accidents. Risk education raises awareness about the dangers, ensuring that civilians, especially children, have the information they need to stay safe. A risk education session may be amongst the most important lessons a child ever attends.

Naturally curious and often unaware of the danger, children are particularly at risk. In 2012, 47 percent of recorded civilian victims were under 18 years old. Shockingly, the figures in some countries are far higher. In Afghanistan, children represented 76 percent of civilian casualties recorded in the first six months of 2014.