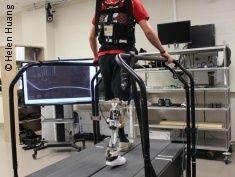 The new system takes into account the angle of the prosthetic knee while walking; © Helen Huang

"When a patient gets a powered prosthetic, it needs to be customized to account for each individual patient's physical condition, because people are different in size and strength. And that tuning is done by a prosthetist," says Helen Huang, lead author of a paper on the work and an associate professor in the biomedical engineering program at NC State and UNC-Chapel Hill. "In addition, people are dynamic – a patient's physical condition may change as he or she becomes accustomed to a prosthetic leg, for example, or they may gain weight. These changes mean the prosthetic needs to be re-tuned, and working with a prosthetist takes time and money."

To address this problem, the researchers developed an algorithm that can be incorporated into the software of any powered prosthesis to automatically tune the amount of power a prosthetic limb needs in order for a patient to walk comfortably. The algorithm would not only make it easier for patients to walk while reducing prosthetist-related costs, but would also allow a prosthesis to adjust to changing conditions.

"For example, the algorithm could provide more power to a prosthesis when a patient carries a heavy suitcase through an airport," Huang says. The system works by taking into account the angle of the prosthetic knee while walking.

Powered prosthetic legs are programmed so that the angle of the prosthetic joints – the knee or ankle – while walking mimics the movement of the joints when a person without a disability is walking. During the conventional prosthetic tuning process, a prosthetist adjusts the powered prosthesis's system so that it exerts the power necessary to recreate those normal joint motions while walking.

But changes in a person's weight, or gait, can affect the prosthesis's ability to achieve that "natural" joint angle.

The automatic-tuning algorithm takes a similar approach, tracking the angle of the prosthetic joint while walking. But it is able to adjust the amount of power the prosthesis receives in real time, in order to maintain the proper angle.

"In testing, we found that the computer – using the algorithm – performed better than prosthetists at achieving the proper joint angle," Huang says. "So we know our approach works. But we're still working to make it better."

"Prosthetists rely on years of experience to not only adjust the joint angle, but to adjust a prosthesis to help patients maintain a comfortable posture while walking," Huang adds. "We're not yet able to replicate the prosthetist's success in achieving those comfortable 'trunk motions', but it's something we're working on."

More about the North Carolina State University at: www.ncsu.edu