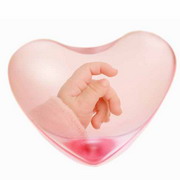 About one in every 120 babies is
born with CHD;
© panthermedia.net/Lewis Lee

The test measures oxygen in blood. Low oxygen levels would trigger further investigation. About 25 percent of the babies born with CHD is critical, requiring special care early in life. CHD is responsible for more deaths in the first year of life than any other birth defect, but often outcomes can be improved with early detection.

"Screening for low-blood oxygen saturation can be an effective way to identify otherwise well-appearing babies who have undetected critical CHD," said Alex Kemper, Associate Professor of Paediatrics at Duke University Medical Center. "One of the biggest challenges in implementing screening will be the follow-up after a positive screen."

Many of the identified babies will require an evaluation by a paediatric cardiologist or an echocardiogram, or ultrasound of the heart, before they can go home. Because not all hospitals have these services, some babies may need to be transferred to other hospitals.

"Therefore, it is very important to avoid false positive screening results," Kemper said. "We believe that the strategy we have developed will identify most cases but also have a false positive rate of less than one percent."

The group's recommendations are based on large studies conducted in the United States and Europe. However, there are still many unanswered questions about how to best screen, including timing and the standards for a positive screen.

For example, the algorithm's usual cut-off point for oxygen saturation may need to be adjusted for babies in high-altitude nurseries, where blood oxygen levels may be normally slightly lower. "We expect that as screening is adopted, these recommendations will be improved, but there is good evidence that this screening can save lives," Kemper said.

Based on evidence that has already been gathered, the state of New Jersey will initiate CCHD screening on Aug. 31 for all babies before discharge.


- More about the Duke University Medical Center at: www.dukemedicine.org