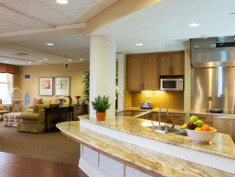 Creating warm residential-style common areas is one of many cultural changes that improve quality of care; © Wayne Dion for Tockwotton Home

If a nursing home makes an extensive investment in "culture change" it will see improvements in quality of care, according to a new study led by Brown University gerontology researchers.

Culture change is a rethinking of nursing home operations and structure to allow a more residential lifestyle for residents, more resident choice in schedules and activities, and more front-line staff input into care management. Residents, for example, may become able to decide when to go to lunch and nurse's aides may get a seat at the table in designing care processes. Across the country nursing homes are at various stages of implementing such changes, ranging from not at all to extensively.

In the new study, a research team led by Susan Miller, professor of health services policy and practice at the Brown University School of Public Health, focused on homes that had recently accomplished some degree of implementation. Miller's goal was not only to measure whether culture change introduction produced improvements in care quality but to do so for nursing homes that had implemented a similar extent of culture change practice by 2009-10.

"What's unique about this paper is that we stratified by the amount of implementation," said Miller, senior author of the research.

The study's results come from surveys of directors of nursing at 824 homes in which Miller and her team assessed the degree of culture change implementation as of 2009-10. The researchers considered nursing homes that introduced culture change between 2005 and 2010, excluding homes that either had not adopted change or were especially early adopters.

In their analysis Miller and her colleagues separated out the top quartile of implementers from the bottom three quartiles. For each group they looked at whether the list of 13 quality measures improved or worsened in the year after culture change introduction, compared to similar nursing homes that had not yet introduced it. They controlled for factors such as the homes' occupancy rates, their mix of medical cases, and the degree of county-level competition.
Upon introduction of culture change, the homes that implemented culture change most extensively produced statistically significant improvements in the percent of residents on bladder training programs, the percent of residents who required restraints, the proportion of residents with feeding tubes, and the percent with pressure ulcers. They also showed a nearly significant reduction in resident hospitalizations. No quality indicator became significantly worse.

Among homes that implemented less culture change, the only significant improvement occurred in the number of Medicare/Medicaid health-related and quality of life survey deficiencies. (Miller said some nursing home administrators stated in interviews that they implemented those practices targeted by state surveyors.) Urinary tract infections and hospitalizations got slightly worse.

No degree of culture change significantly improved other quality indicators such as the percent of residents with advanced directives or the proportion on antipscychotic medications. Falls did not get better, but they also did not get worse as some elder care observers had feared they would under culture change, Miller noted.

The results help affirm that culture change can be effective in homes where the staff has embraced its patient-centered, flatter-management philosophy, Miller said. "It seems to be a valid notion to improve quality with adoption when you really adopt the philosophy and are doing a lot," she said.