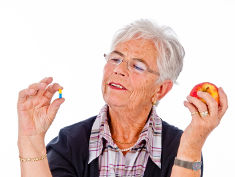 Many older people are ingesting too much dietary supplements; © Rainer Junker/panthermedia.net

Many older people are ingesting too much magnesium and vitamin E in the form of dietary supplements. This was discovered by scientists of the Helmholtz Zentrum München in a population-based study.

The scientists working with Sigrid Schwab, Barbara Thorand and Annette Peters from the Institute of Epidemiology II (EPI II) at the Helmholtz Zentrum München (HMGU) investigated the prevalence of dietary supplement use in the general population and determined daily intake amounts of ingested vitamins and minerals in supplement users.

The data are derived from the KORA-Age Study, which examines the association between lifestyle factors and health status in people aged 65 years or older in the area of Augsburg, Germany. Roughly 54 percent of the women and 34 percent of the men over 64 years of age take dietary supplements or medications containing vitamins, minerals or other substances such as omega-3 fatty acids or coenzyme Q10. In addition to the sex, the frequency of ingestion is associated with the level of education, physical activity, smoking habits and presence of a neurological disease. In women, the most frequently supplemented substances are magnesium and vitamin D, while in men they are magnesium and vitamin E. In both sexes, it was observed that the ingested doses of magnesium and vitamin E frequently exceed the Tolerable Upper Intake Levels established by the European Food Safety Authority.

The administered supplement quantities were too high in 20 percent of the female and 33 percent of the male participants regularly taking magnesium and in 8 and 14 percent, respectively, of the participants regularly taking vitamin E. In contrast, vitamin D, whose supplementation is frequently medically recommended in this age group because of its positive effect on bone metabolism, was taken by relatively few older people, the scientists reported.

"Current and population-based data on the intake of supplements in older people are largely missing for Europe. Nevertheless, this population group is of special interest due to the age-related nutrient deficits", says Peters, Director of EPI II. "Industry and advertising appear to have a large influence on the selection of the preparations. Results such as these are therefore important in order to make it possible to give meaningful recommendations on dietary supplements for older people."

More about the Helmholtz Zentrum München at: www.helmholtz-muenchen.de