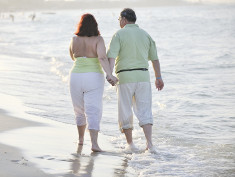 Slightly overweight people have the highest survival rate, those who moved from overweight to obese are close behind; © Benis Arapovic/
panthermedia.net

Some overweight older adults don't need to lose weight to extend their lives, but they could risk an earlier death if they pack on more pounds. In fact, the nationwide study found that people who were slightly overweight in their 50s but kept their weight relatively stable were the most likely to survive over the next 16 years.

They had better survival rates than even normal-weight individuals whose weight increased slightly, but stayed within the normal range.

On the other hand, those who started out as very obese in their 50s and whose weight continued to increase were the most likely to die during that period.

Overall, the results suggest that about 7.2 percent of deaths after the age of 51 are due to weight gain among obese people, at least among the generation in this study, said Hui Zheng, assistant professor of sociology at The Ohio State University.

"You can learn more about older people's mortality risk by looking at how their weight is changing than you can by just looking at how much they weigh at any one time," Zheng said.

While some extra weight seemed protective in this study, Zheng cautioned that these results applied only to people over 50. His previous research, published in Social Science & Medicine, suggests that being overweight may not be helpful for younger people.

"Our other research suggests that the negative effect of obesity on health is greater for young people than it is for older people, so young people especially shouldn't think that being overweight is harmless," he said.

The researchers used data from the Health and Retirement Study, a nationally representative survey of Americans born between 1931 and 1941. This study analyzed 9,538 respondents who were aged 51 to 61 when the survey began in 1992. They were re-interviewed every two years until 2008, and the researchers had information on how their body mass index (BMI) changed at each interview and whether they died at any point before December 2009.

Zheng and his colleagues classified respondents into six groups, depending on their BMI at the beginning of the study and how it changed over the 16-year period they were surveyed.

While slightly overweight people (BMI of 25 to 29.9) whose weight was steady had the highest survival rate, those who moved from overweight to obese (BMI 30 to 34.9) were close behind.

"This suggests that among overweight people at age 51, small weight gains do not significantly lower the probability of survival," Zheng said.

The third highest survival rate among the six groups was normal weight individuals (BMI of 18.5 to 24.9) whose weight increased slightly, but stayed within normal range.
Next came the Class I obese (BMI of 30 to 34.9) whose weight was moving upward.

Next to last were normal weight individuals who lost weight. Although the study attempted to control for illnesses among those studied, it may be that many of these individuals dropped weight because of illness.

The most obese individuals (BMI of 35 and over) who continued to add weight had the lowest survival rate of the six groups.

There weren't enough people who started out as overweight and obese and lost weight to include in this analysis, Zheng said.

"We can't really evaluate the effectiveness of planned weight loss on mortality. Even in the normal-weight people in this study, there was no way to tell whether weight loss was planned," he said.

Zheng noted that the study took into account a wide variety of demographic and socioeconomic factors that may play a role in both weight and mortality among Americans. The researchers also controlled for whether the respondents smoked, whether they had a variety of chronic illnesses and even how they rated their own health. The results stood even after all of these factors were taken into account.

„Being slightly overweight is probably protective for older people because the older population is more likely to get illnesses and disease, especially cancer, that cause dangerous weight loss," he said. "In that case, a small amount of extra weight may provide protection against nutritional and energy deficiencies, metabolic stresses, the development of wasting and frailty, and loss of muscle and bone density caused by chronic diseases."
Younger people are less likely to get many of the diseases that afflict older adults, which is one reason extra weight is not good for them, he said.

But Zheng said the main message for everyone, including older adults, is that packing on the pounds, especially if you're obese, can be hazardous to your health.

"Continuing to put on weight can lower your life expectancy," he said.