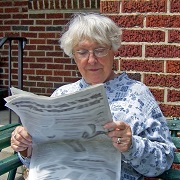 Today's senior citizens are reporting fewer visual impairment problems than their counterparts from a generation ago, according to a new Northwestern Medicine study. Improved techniques for cataract surgery and a reduction in the prevalence of macular degeneration may be the driving forces behind this change, the researchers said.

The study shows that in 1984, 23 per cent of elderly adults had difficulty reading or seeing newspaper print because of poor eyesight. By 2010, there was an age-adjusted 58 per cent decrease in this kind of visual impairment, with only 9.7 per cent of elderly reporting the problem.

There was also a substantial decline in eyesight problems that limited elderly Americans from taking part in daily activities, such as bathing, dressing or getting around inside or outside of the home, according to the study.

"The findings are exciting, because they suggest that currently used diagnostic and screening tools and therapeutic interventions for various ophthalmic diseases are helping to prolong the vision of elderly Americans," Tanna said.

The study used self-reported data collected from 1984 to 2010 through two major population-based surveys, the National Health Interview Survey and the Survey of Income and Program Participation.

Survey questions revealed how vision problems can impact the daily activities and quality of life of Americans and helped researchers analyse trends in the prevalence of visual impairment of adults in the United States.

While this study didn't identify any of the causes of the change in the prevalence of visual impairment, Tanna said there are three likely reasons for the decline:
• Improved techniques and outcomes for cataract surgery
• Less smoking, resulting in a drop in the prevalence of macular degeneration
• Treatments for diabetic eye diseases are more readily available and improved, despite the fact that the prevalence of diabetes has increased

Future studies should identify which treatment strategies help prevent vision in older adults and then make those treatments available to as many people as possible, Tanna said.