Older adults who volunteer are happier and healthier 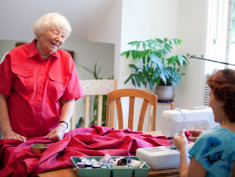 Health benefits among elderly people appear to peak at 100 volunteer hours annually or 2 to 3 hours per week;
© Paul Vasarhelyi/panthermedia.net

Older adults who stay active by volunteering are getting more out of it than just an altruistic feeling – they are receiving a health boost. A new study, led by the Rotman Research Institute at Baycrest Health Sciences, is the first to take a broad-brush look at all the available peer-reviewed evidence regarding the psychosocial health benefits of formal volunteering for older adults.

Lead investigator Nicole Anderson, together with scientists from Canadian and American academic centres, examined 73 studies published over the last 45 years involving adults aged 50-plus who were in formal volunteering roles.

To be included in the review, studies had to measure psychosocial, physical and/or cognitive outcomes associated with formal volunteering – such as happiness, physical health, depression, cognitive functioning, feelings of social support and life satisfaction.

"Our goal was to obtain a more comprehensive view of the current state of knowledge on the benefits of volunteering among older adults," said Anderson, a senior scientist with Baycrest's Rotman Research Institute and associate professor, University of Toronto. "We discovered a number of trends in the results that paint a compelling picture of volunteering as an important lifestyle component for maintaining health and wellbeing in later years."

Among the key findings:
• Volunteering is associated with reductions in symptoms of depression, better overall health, fewer functional limitations, and greater longevity.
• Health benefits may depend on a moderate level of volunteering. There appears to be a tipping point after which greater benefits no longer accrue. The "sweet spot" appears to be at about 100 annual hours, or 2-3 hours per week.
• More vulnerable seniors (i.e. those with chronic health conditions) may benefit the most from volunteering.
• Feeling appreciated or needed as a volunteer appears to amplify the relationship between volunteering and psychosocial wellbeing.

"Taken together, these results suggest that volunteering is associated with health improvements and increased physical activity – changes that one would expect to offer protection against a variety of health conditions," said Anderson. Indeed, a moderate amount of volunteering has been shown to be related to less hypertension and fewer hip fractures among seniors who volunteer compared to their matched non-volunteering peers.

With dementia prevalence projected to double over 20 years, from over 30 million people worldwide today to more than 65 million people in 2030 (Alzheimer's Disease International and World Health Organization, 2012), Anderson called it a "startling omission" that the field of neuroscience research has yet to investigate the capacity of volunteering to mitigate dementia risk or delay onset.

"We encourage investigators to include more objective measures of cognitive functioning in future studies. Particularly interesting would be the inclusion of a more comprehensive battery of neuropsychological tests, so that the association of volunteering with the risks of various forms of dementia and its precursor, mild cognitive impairment, could be ascertained," the report concluded.

More about the Baycrest Centre for Geriatric Care unter: www.baycrest.org