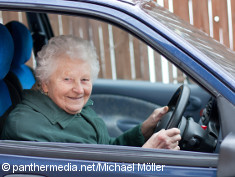 Many older drivers give up driving because of concerns about their safety and a general loss of confidence on the road; © panthermedia.net/Michael Möller

Older drivers who lack confidence on the road could benefit from a new training plan being developed by researchers at Aston University. The project will target older drivers’ ability to pay attention to different locations when at speed – known as their 'attentional switching flexibility'. As people age, this ability, essential for safe driving, can become slow down with serious implications for drivers and others on the road.

Although older drivers are reported to have fewer collisions and pose a safety lower risk to other road users than other age groups, it is known they are much more likely to suffer from a lack of attentional switching flexibility, which can severely affect their confidence. Aston researchers believe the extra time it takes older people to shift their attention from one thing to another may be a major source of this problem, and have developed a new training plan to tackle the issue.

A team, led by Dr Carol Holland, Director of the Aston Research Centre for Healthy Ageing at Aston University’s School of Life and Health Sciences, will test participants with a series of visual prompts designed to gradually increase the speed at which they can focus their attention. They will then be placed in a driving simulator and asked to tackle difficult traffic situations at virtual roundabouts and road intersections.

Their performance on the simulator will be measured over a period of time to assess the degree of their improvement.

"Many older drivers give up driving because of concerns about their safety and a general loss of confidence on the road. We hope to be able to keep them on the road for longer because they tend not to be bad drivers at all – far from it. The issue is one of confidence; if this can be built up through a specifically-designed training programme such as the one we are developing, it will improve the safety not only of older drivers, but of other road users as well," Dr Holland said. "No one has studied the impact of attentional switching costs on the proficiency of older drivers before. We want to change the untrue stereotype of older drivers as unsafe and help enable them to feel more confident and competent on the road."

Delaying the point when people give up driving could have significant general health benefits. Early driver cessation is often a precursor of depression and isolation. Loss of independent mobility is also associated with 'life space constriction', which is linked to frailty and loss of independence.

It is also known that maintaining or increasing the proportion of older drivers on the roads in any area or region has a positive influence on the road transport environment and overall incident frequency.

The project is part funded by the Rees Jeffreys road fund as a PhD studentship and will be conducted in collaboration with Professor Klaus Kessler of the Aston Brain Centre.

More about the Aston University at: www.aston.ac.uk