Older people getting smarter, but not fitter 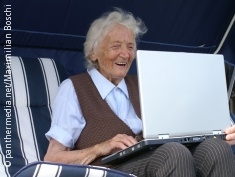 The elderly are scoring better on cognitive tests than people of the same age did in the past – a trend that could be linked to higher education rates and increased use of technology in our daily lives; © panthermedia.net/Maximilian Boschi

People over age 50 are scoring increasingly better on tests of cognitive function, according to a new study by the International Institute for Applied Systems Analysis (IIASA), published in the journal PLOS ONE. At the same time, however, the study showed that average physical health of the older population has declined.

The study relied on representative survey data from Germany which measured cognitive processing speed, physical fitness, and mental health in 2006 and again in 2012. It found that cognitive test scores increased significantly within the 6-year period (for men and women and at all ages from 50 to 90 years), while physical functioning and mental health declined, especially for low-educated men aged 50-64. The survey data was representative of the non-institutionalized German population, mentally and physically able to participate in the tests.

In recent years, population experts at the IIASA have been exploring new ways to measure age that focus on people’s characteristics rather than the number of years they have lived. Cognition normally begins to decline with age, and is one key characteristic that demographers use to understand how different population groups age more successfully than others.

Previous studies have found elderly people to be in increasingly good health – "younger" in many ways than previous generations at the same chronological age – with physical and cognitive measures all showing improvement over time. The new study is the first to show divergent trends over time between cognitive and physical function.

"We think that these divergent results can be explained by changing lifestyles," says IIASA World Population Program researcher Nadia Steiber, author of the PLOS ONE study. "Life has become cognitively more demanding, with increasing use of communication and information technology also by older people, and people working longer in intellectually demanding jobs. At the same time, we are seeing a decline in physical activity and rising levels of obesity."

"On average, test scores of people aged 50plus today correspond to test scores from people 4-8 years younger and tested 6 years earlier," says Valeria Bordone, a researcher at IIASA and the affiliated Wittgenstein Centre for Demography and Global Human Capital.

The studies both provide confirmation of the "Flynn effect" – a trend in rising performance in standard IQ tests from generation to generation. The studies show that changes in education levels in the population can explain part, but not all of the effect.

Bordone says, "We show for the first time that although compositional changes of the older population in terms of education partly explain the Flynn effect, the increasing use of modern technology such as computers and mobile phones in the first decade of the 2000s also contributes considerably to its explanation."

The researchers note that the findings apply to Germany and England, and future research may provide evidence on other countries.

More about the International Institute for Applied Systems Analysis at: www.iiasa.ac.at