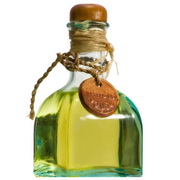 Using olive oil for cooking and as
dressing lowers the risk of
having a stroke; © SXC

It is not only delicious, but maybe also very helpful: A new study suggests that consuming olive oil may help prevent a stroke in older people.

"Our research suggests that a new set of dietary recommendations should be issued to prevent stroke in people 65 and older," said study author Cécilia Samieri, with the University of Bordeaux and the National Institute of Health and Medical Research (INSERM) in Bordeaux, France. "Stroke is so common in older people and olive oil would be an inexpensive and easy way to help prevent it."

For the study, researchers looked at the medical records of 7,625 people ages 65 and older from three cities in France: Bordeaux, Dijon and Montpellier. Participants had no history of stroke. Olive oil consumption was categorised as "no use," "moderate use" such as using olive oil in cooking or as dressing or with bread, and "intensive use," which included using olive oil for both cooking and as dressing or with bread. Samieri said the study participants mainly used extra virgin olive oil, as that is 98 percent of what is available in France.

After a little over five years, there were 148 strokes.

After considering diet, physical activity, body mass index and other risk factors for stroke, the study found that those who regularly used olive oil for both cooking and as dressing had a 41 percent lower risk of stroke compared to those who never used olive oil in their diet (1.5 percent in six years compared to 2.6 percent).

Olive oil has been associated with potentially protective effects against many cardiovascular risk factors, such as diabetes, high blood pressure, high cholesterol and obesity. In an accompanying editorial, Nikolaos Scarmeas, of Columbia University and a member of the American Academy of Neurology noted that it is not clear which particular elements of olive oil could be protective, while the effects of olive oil could even be indirect by making other healthy foods tastier. He also cautioned that only future clinical trials can increase confidence in the findings and potentially lead to stroke prevention recommendations.


- More about the American Academy of Neurology at www.aan.com