Omega 3 can help children with ADD 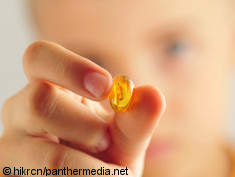 Omega 3 can improve symptoms of the inattentive subtype of ADHD called ADD; © hikrcn/panthermedia.net

Supplements of the fatty acids omega 3 and 6 can help children and adolescents who have a certain kind of ADHD. These are the findings of a dissertation at the Sahlgrenska Academy, University of Gothenburg, which also indicates that a special cognitive training program can improve problem behavior in children with ADHD.

Between three to six percent of all school age children are estimated to have ADHD (Attention Deficit Hyperactivity Disorder). ADHD is a disorder that entails a difficulty controlling impulses and temper, sitting still, waiting, or being attentive for more than short periods at a time. There are various kinds of ADHD where disturbances in attention, hyperactivity and impulsivity have varying degrees of prominence.

ADHD is often treated with stimulant medications, which are effective for most, but do not work for everyone.

In this study, 75 children and adolescents with ADHD were given either the fatty acids omega 3 and 6 or a placebo over three months, and then they were all given omega 3/6 over three months. The study was conducted double-blind, which means that neither the researchers nor the participants were allowed to know whether they received the active capsules until afterwards.

"For the group as a whole, we did not see any major improvement, but in 35 percent of the children and adolescents who have the inattentive subtype of ADHD called ADD, the symptoms improved so much that we can talk about a clinically relevant improvement," says Mats Johnson, doctoral student at the Sahlgrenska Academy at the University of Gothenburg.

The levels of omega 3 and omega 6 were also measured in blood samples, where those who had a clear improvement of their symptoms also showed a better balance between the blood levels of these two fatty acids.

The dissertation also indicates that a cognitive training method called Collaborative Problem Solving (CPS) can be a good alternative or complement in the treatment of ADHD and oppositional defiant disorder (ODD).

With this method the children and the family receives help in training cognitive ability and solving problematic situations. The study included 17 children, whose families received up to ten weeks of CPS sessions. The families were then asked how much the behavioral problems improved directly after the treatment as well as six months afterwards.

"Our study of CPS as a treatment for ADHD and ODD is the first in Sweden. All families in our study completed the treatment, and half of them experienced a large or very large improvement of the behavioral problems," says Mats Johnson.

The patient group that still had severe ADHD symptoms when the CPS treatment was complete were given the opportunity to supplement treatment with stimulants medication. In the follow-up six months later, 81 percent of all of the participating families experienced a large or very large improvement.

According to Mats Johnson, this indicates that CPS can improve problem-creating behavior in children ADHD and ODD, and that children with severe ADHD symptoms can be improved with a combination of CPS and ADHD medication.

More about the University of Gothenburg at: www.gu.se