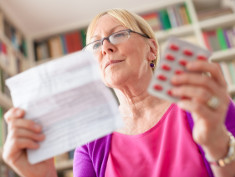 More than 9 million older adults in the U.S. are being prescribed medications that may be causing them more harm than benefit; © panthermedia.net/
Diego Cervo

About three out of four older Americans have multiple chronic health conditions, and more than 20 percent of them are being treated with drugs that work at odds with each other – the medication being used for one condition can actually make the other condition worse.

This approach of treating conditions "one at a time" even if the treatments might conflict with one another is common in medicine, experts say, in part because little information exists to guide practitioners in how to consider this problem, weigh alternatives and identify different options.

One of the first studies to examine the prevalence of this issue, however, found that 22.6 percent of study participants received at least one medication that could worsen a coexisting condition. The work was done by researchers in Connecticut and Oregon.

In cases where this "therapeutic competition" exists, the study found that it changed drug treatments in only 16 percent of the cases. The rest of the time, the competing drugs were still prescribed.

"Many physicians are aware of these concerns but there isn't much information available on what to do about it," said David Lee, an assistant professor in the Oregon State University/Oregon Health & Science University College of Pharmacy. "Drugs tend to focus on one disease at a time, and most physicians treat patients the same way," Lee said. "As a result, right now we're probably treating too many conditions with too many medications. There may be times it's best to just focus on the most serious health problem, rather than use a drug to treat a different condition that could make the more serious health problem even worse."

More research in this field and more awareness of the scope of the problem are needed, the scientists said. It may be possible to make better value judgments about which health issue is of most concern, whether all the conditions should be treated, or whether this "competition" between drug treatments means one concern should go untreated. It may also be possible in some cases to identify ways to treat both conditions in ways that don't conflict with one another.

A common issue, for example, is patients who have both coronary heart disease and chronic obstructive pulmonary disease, or COPD. Beta blockers are often prescribed to treat the heart disease, but those same drugs can cause airway resistance that worsens the COPD.

"There are several types of beta blocker that don't cause this negative interaction, but many of the other types are still prescribed anyway," Lee said. "It's this type of information that would be of value in addressing these issues if it were more widely known and used."

This study was done by researchers from OSU and the Yale University School of Medicine, with 5,815 community-living adults between the years 2007-09. The lead author of the study was Dr. Mary E. Tinetti at Yale University, and it was supported by the National Institutes of Health. The analysis included a nationally representative sample of older adults, and both men and women.

"More than 9 million older adults in the U.S. are being prescribed medications that may be causing them more harm than benefit," said Jonathan Lorgunpai, a medical student at the Yale School of Medicine and co-author of the study. "Not only is this potentially harmful for individual patients, it is also very wasteful for our health care system."

Direct competition between medications is just one of the concerns, the report noted. Use of multiple medications can also lead to increased numbers of falls and delirium, dizziness, fatigue and anorexia.

The researchers pointed out that the presence of competing conditions does not necessarily contraindicate the use of needed medications, but rather the need for this competition to be more seriously considered in treatment.