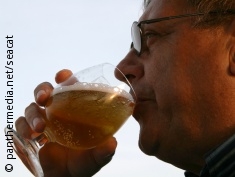 One in five older people who drink alcohol are consuming it at unsafe levels - over 21 units of alcohol for men and 14 units for women each week - according to a study by King's College London. The research in inner-city London, published in BMJ Open, found these unsafe older drinkers are more likely to be of higher socioeconomic status.

The researchers used anonymized electronic GP health records for 27,991 people aged 65 and over in the Borough of Lambeth in London. From these records, they identified 9,248 older people who had reported consuming alcohol and of these 1,980 people drank at unsafe levels.

Dr Tony Rao, lead author from the Institute of Psychiatry, Psychology & Neuroscience at King's College London said: "As the Baby Boomer generation become seniors, they represent an ever increasing population of older people drinking at levels that pose a risk to their health. This study shows the need for greater awareness of the potential for alcohol related harm in older people, particularly those of higher socio-economic status, who may suffer the consequences of ill health from alcohol at an earlier age than those in previous generations."

Dr Mark Ashworth, study author from the Division of Health and Social Care Research at King's College London said: "This research highlights that as GPs we need be more aware of the risk of older people, especially men, drinking excessively. Reducing alcohol misuse is important to prevent premature death and serious negative health effects, such as alcoholic liver disease, which are big burden on our health system. Alcohol excess carries additional risks in the older population such as falls and confusion."

Ashworth added: "Based on our findings, the elderly who were most at risk were those from the white British population rather than from an ethnic minority, and those who were wealthier and better educated rather than those from a more deprived background."

The authors caution that results from inner-city London may not apply to other areas of the UK with different demographics. They also note that while the study contains an almost complete sample of older people in the area, people may have under-reported their alcohol consumption to their GP.

More about King's Collage at: www.kcl.ac.uk