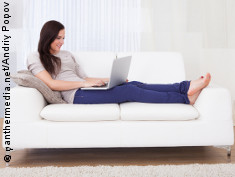 Participants of the study use fewer opioids and are more confident and positive; © panthermedia.net/Andriy Popov

Washington State University researchers have found that people can manage chronic pain and reduce their reliance on opioids through an Internet-based program that teaches non-medical alternatives like increased physical activity, thinking more positively and dealing with emotions.

Marian Wilson, an assistant professor in the College of Nursing, tracked 43 people with chronic non-cancer pain as they went through an eight-week course of online tools to manage psychological, social and health issues associated with chronic pain. Compared to a similar-sized control group, the participants reported that they adopted more practices to change negative thinking patterns and use relaxation techniques to help control pain.

"With negative emotions, you often have that physical response of tension," said Wilson. "So we really want people with pain to learn they have control and mastery over some of those physical symptoms. Meditation and relaxation can help with that."

Such techniques are hard for patients to get in traditional care settings but can go a long way to make them more confident about managing their pain, she said. Several studies have found that such confidence, called "self-efficacy," is linked to a higher quality of life, the ability to return to work and higher levels of activity, she said.

"Maybe that pain is never going to go away but you can divert your attention from it," said Wilson. "You can focus on more positive things and you can absolutely get that thought on a back burner rather than fixating on it."

She found that four out of five online program participants made progress toward goals to reduce or eliminate pain or other unspecified medications, as opposed to roughly half the control group.

"Unique to our study was the discovery that more appropriate use of opioid medicines could be an unintended consequence of participation," Wilson and her colleagues write in the journal Pain Management Nursing.

The authors note that 60 percent of the more than 15,000 opioid-overdose deaths each year in the United States are from medications obtained through legitimate prescriptions. Opioids also can become less effective over time while actually increasing a user's perception of pain.

"For many patients, more and more evidence is coming out that if we can get them off the opiates, or reduce their use and help them become more active, they'll actually feel better," Wilson said. "Plus they won't be at risk for death from opioid overdose, which they're at risk for now because you often have to keep increasing the opioid dose to get the same pain relief."

More about the Washington State University at: www.wsu.edu