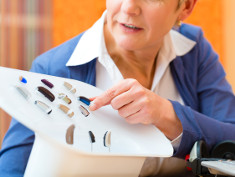 Hearing aids remain significantly under used despite significant improvements in both technology and their provision; © Arne Trautmann/panthermedia.net

A study by The University of Manchester looked at the habits of 160,000 people in the UK aged 40 to 69 years. It found 10.7 per cent of adults had significant hearing problems when listening to speech in the presence of background noise – but only 2.1 per cent used a hearing aid.

One in 10 middle aged adults had substantial hearing problems and were more likely to be from a working class or ethnic minority background.

“This is the first study to describe the prevalence of difficulties understanding speech in background noise in a large sample of the population, anywhere in the world,” Piers Dawes, from The University of Manchester’s Audiology and Deafness research group, said. “It shows hearing aids remain significantly under used despite significant improvements in both technology and their provision, and a high proportion of people who would benefit from treatment may not receive effective intervention.”

Reasons for the lack of uptake might be lack of awareness of treatment options, lack of recognition of their difficulties, finding hearing aids uncomfortable or finding them of limited help.

The University of Manchester team is the first group in the world to gain access to the large UK database from the UK Biobank allowing them to study the habits of 160,000 UK adults.

“There still seems to be a stigma attached to wearing a hearing aid, where as there is little stigma now associated with vision loss and wearing spectacles,” Kevin Munro, Ewing Professor of Audiology at The University of Manchester who also worked on the study, said. “This might be because eye care also involves lifestyle choices – it’s available on the high street without the need to see a GP and onward referral to an audiologist in hospital, which emphasises illness and frailty.”