Orchestra helps boost confidence and mood for those with dementia 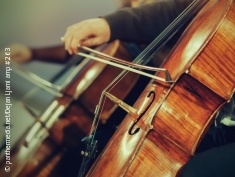 Research has already shown that especially music can reawaken and exercise the brain in those with dementia; © panthermedia.net/Dejan Ljami amp #263

A special orchestra for people with dementia has helped boost their confidence and mood, according to a new research project. The orchestra group has been set up by the Bournemouth University Dementia Institute (BUDI) in Dorset to create a sense of community among participants and also includes professional musicians, carers and students.

The orchestra was initially set up in partnership with Bournemouth Symphony Orchestra (BSO) with a repertoire ranging from Ravel’s Bolero to Henry Mancini’s Moon River. Rehearsals have demonstrated a positive effect on all participants who have also learned new skills and rediscovered old ones.

"Music touches everyone in some way, either by listening or playing – and the BUDI Orchestra has been a life-enhancing project which has benefited everyone," says Professor Anthea Innes, Head of BUDI. "Performing and showcasing skills of those with dementia creates a well-deserved opportunity for them to demonstrate their abilities and to challenge the negative public perceptions that surround the diagnostic label of 'dementia'. Working together to produce a collaborative output is a powerful way to bring out the best in people – not just in terms of their musical skills, but their communication skills, friendships, care and support for one another."

Around 850,000 people in the UK currently live with dementia, a figure which is estimated to double by 2050. Dorset has one of the oldest populations in England, so many people in the local community can relate to the challenges caused by the condition.

The arts are being used increasingly to support health and wellbeing, both in healthcare settings and in the community for people with dementia and their families.

The BUDI Orchestra, funded by Dorset County Council, is one of BUDI’s numerous ongoing creative projects to demonstrate that people with dementia can have fun while learning. A total of eight people with dementia and seven carers were involved in a course of eight weekly two-hour sessions led by Andy Baker, a former BSO community musician and double bass player. They were also supported by two additional professional musicians, Bournemouth University students and staff volunteers.

Previous workshops with the orchestra have identified that most of the people with dementia learned a new skill and the sessions were highly enjoyed by all who took part. One of the participants was Jack, a professional bass player who was forced by eye cancer and dementia to leave his bands. His wife also joined BUDI and played the violin for the first time since school. Both found that the orchestra helped overcome feelings of loneliness, and Jack’s confidence returned as a result of being part of the sessions. The project has also highlighted that the musicians’ and volunteers’ preconceptions of music learning were positively challenged as a result of their experiences with the BUDI Orchestra.

Professor Innes and her research team have produced a guide in collaboration with the professional musicians for those interested in setting up their own community-based music group. Dr Michelle Heward, also from BUDI, says: "Our creative projects show that it is possible for people with dementia to take part, learn something new and have fun, all at the same time."