Over Half of Alzheimer's Cases May Be Preventable 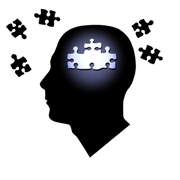 Alzheimer's disease is the most
common form of dementia;
© N. Marques/panthermedia.net

Over half of all Alzheimer's disease cases could potentially be prevented through lifestyle changes and treatment or prevention of chronic medical conditions, according to a study led by Deborah Barnes, a mental health researcher at the San Francisco VA Medical Center.

"What's exciting is that this suggests that some very simple lifestyle changes, such as increasing physical activity and quitting smoking, could have a tremendous impact on preventing Alzheimer's and other dementias in the United States and worldwide," said Barnes, who is also an associate professor of psychiatry at the University of California, San Francisco.

Senior investigator Kristine Yaffe, chief of geriatric psychiatry at SFVAMC, noted that the number of people with Alzheimer's disease is expected to triple over the next 40 years. "It would be extremely significant if we could find out how to prevent even some of those cases," said Yaffe, who is also a professor of psychiatry, neurology and epidemiology at UCSF.


- More about the University of California - San Francisco at www.ucsf.edu