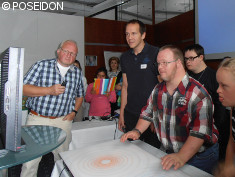 With the help of apps people with Trisomy 21 should achieve a greater level of independence in their lives; © POSEIDON

An ICT research EU project is producing visual and touch apps to help people with Trisomy 21 become more independent in their daily lives.

Many people with Trisomy 21 face barriers to taking part in community activities the rest of us take for granted. Whether it’s travelling on public transport, paying for items in a supermarket or getting to appointments on time, they may need help if they get into difficulties.

POSEIDON (PersOnalized Smart Environments to increase Inclusion of people with DOwn’s syndrome) is an exciting three-year project running until November 2016, which will use information technology to help people with Trisomy 21 achieve a greater level of independence in their lives, a greater autonomy at home, in work, education and leisure, as well as improve their opportunities for socializing. The types of technology being developed during the project include apps for tablets and smartphones virtual reality programs and interactive tables.

Knut Melhuus, a young Norwegian with Trisomy 21, will be one of those users testing some of the apps POSEIDON produces. He confesses to being a bit of a technology nut: He owns a tablet, a smartphone and a PC, and regularly phones, emails and sends SMS messages to his friends. "Technology is awesome useful," he enthuses. "I use the calendar a lot for appointments and birthdays. Then I can see what I’m supposed to do, remind Mum, and send someone an SMS when it’s their birthday. I also use social networks, like Facebook and Snapchat."

One of the apps the POSEIDON partners in the UK, Germany and Norway are designing is a calendar which presents the events of the day in a simple way, links in school timetables, weather information and instruction videos. On a particular day, for instance, it will tell the user which schoolbooks to pack, which clothes and shoes would be most suitable to wear, and whether he or she needs an umbrella or not.

"We want to give people with Trisomy 21 additional support in comparison to that provided by standard smartphones and tablets," explained POSEIDON coordinator Terje Grimstad, of Karde AS, an innovative product developer in Norway. "Many people with Trisomy 21 cannot take advantage of the standard functionality, since it is not adapted to their skills and abilities."

The partners are taking a user-centric approach, examining the needs of around 20 people with Trisomy 21 and their families, as well as carers and teachers. The prototypes they are seeking to develop and are beginning to test with the target group include virtual and photo-based navigation apps, and tables with touch and free-air gesture technology which interact with large screens that could be useful in classrooms. They are also looking at shopping apps which help with money handling.

Questionnaires have been sent out through Trisomy 21 associations in 10 countries in Europe and two user workshops were held earlier this year – in Oslo and Mainz, Germany – where some ideas were tried out. Hundreds of replies to the questionnaires were received which, along with the experience of the workshops, reveal that people with Trisomy 21 are generally familiar with ICT equipment. 85 percent and 57 percent of them already use tablets and smartphones, respectively. The project partners will be running a pilot phase with families from mid-2015 and hope to introduce their first apps to the market in early 2016, after which they will hold a third workshop in the UK in Autumn 2016.

One of the key conclusions at this early stage is that the apps need to facilitate a high degree of personalization. "One size doesn’t fit all," says Terje. "People with Trisomy 21 and their carers need to be able to load in, for example, their own timetables, instruction videos and transport information and photographs. Norway looks very different when there’s snow on the ground! Currencies are another issue, whether it’s euros, pounds or krone."

The partners also want the platform they are building to be widely available to other system developers worldwide to enable them to develop new apps for the target group. They plan to talk to technology companies in the final year of the project about how their results can be used on a bigger scale.