Pain of Artificial Legs Could Be Eased by Real-Time Monitoring 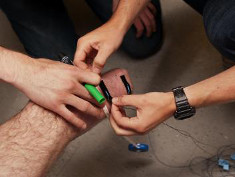 Electrodes with a sticky backing are placed at various points on the leg. They track the fluid volume changes within the leg; © Mary Levin/UW

Many people who use prostheses experience pain on a daily basis where their skin meets the socket, particularly those who have diabetes or other diseases that affect their physiology. University of Washington (UW) engineers aim to ease this discomfort with research that could help build better sockets. They have developed a device that tracks how much a person's limb swells and shrinks when inside a prosthetic socket.

The data could help doctors and patients predict how and when their limbs will swell, which could be used to build smarter sockets. "This provides us a window into what's happening," said principal investigator Joan Sanders, a UW professor of bioengineering. "I'm really encouraged by what we have so far."

Soft tissues in a prosthesis socket swell and shrink often during the day. This is a natural fluctuation that happens when we increase physical activity, sit or stand and even eat salty foods. But in a fixed socket, these fluid volume changes can be particularly painful, forcing people to seek relief by removing their artificial limb or adjusting the snugness of the fit by adding or removing fabric socks.

If physicians can track when an individual typically experiences volume changes in his or her prosthesis socket, they can better fit patients with artificial limbs and reduce the amount of pain, said Kate Allyn, the team's lead research prosthetist who has worked for years making and fitting artificial limbs to patients.

The device measures the percent increase or decrease of fluid volume in a patient's limb by receiving data from small electrodes placed in different spots on the leg. Instrument electronics can be worn in a fanny pack and include a circuit board that calculates the fluid volume change in the leg tissues, transmitting the data wirelessly to a computer or storing it on the device. Over the past two years, engineers tested a larger prototype on about 60 patients in their Seattle lab. Now they have a checkbook-sized portable version that they have brought to clinics in Seattle and San Francisco.

Researchers are testing the device by asking patients to go through a routine that includes sitting, standing and walking as the device records fluid changes. In the UW lab, Bailey does a series of 90-second exercises while wearing the portable device. Data is transmitted wirelessly to a tablet that displays the changes in his limb size about 15 times a second. Ten years after his accident, Ron Bailey can do nearly everything he enjoyed before – pain free. But he still experiences shrinkage in his residual limb, and for the past eight years has helped the UW team test various prototype devices and instruments.

In the near term, researchers hope clinics could go through a similar routine to help track an individual's swelling and shrinking patterns. "Each person has his or her own characteristics and qualities that affect how limb volume changes," Sanders said. "You really have to look at each person on a case-by-case basis."

Longer term, researchers want to build a smaller device that patients could wear for a couple of weeks or longer to monitor changes in their limb size as they go about their daily routines. The hope is that prosthetic limb sockets will become more robust and flexible, accommodating natural changes in swelling without causing discomfort or inconvenience. The UW device is promising for understanding how to design these smart prostheses, Allyn said.

This summer the team will work with patients across the U.S. and Canada who use vacuum-suction technology to help keep their residual limbs snug in the sockets and adjust the fit when tissues swell and shrink. Patients say this vacuum can help improve socket comfort and reduce pain, but the technology requires careful maintenance and it can be disruptive when the noisy vacuum turns on.