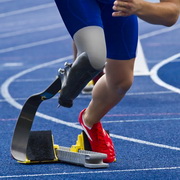 Vancouver-based clinician and researcher Andrei Krassioukov is packing for the Paralympic games in London. Rather than packing sports equipment, he has a suitcase full of advanced scientific equipment funded by the Canada Foundation for Innovation that he will use to monitor the cardiovascular function of athletes with spinal cord injuries.

Up to 90 per cent of people with injuries between that cervical and high thoracic vertebrae suffer from a condition that limits their ability to regulate heart rate and blood pressure. For top-level athletes, this can be a huge competitive disadvantage. Facing the pressure of top-level international competition, Paralympic athletes have found creative ways to boost their blood pressure through purposely inflicting pain or discomfort, causing huge spikes in blood pressure.

"As a clinician, I can understand why Paralympic athletes are boosting their blood pressure" said Krassioukov. "They are not being fairly classified based on the true nature of their disability. We are working to change that."

This process is not only dangerous, increasing the risk of stroke, but it's also banned by the Paralympic committee. Krassioukov has been asked by the International Paralympic movement to find a process for assessing and classifying athletes based on cardiovascular function – making the need for this type of boosting irrelevant.

Think of classification at the Paralympic games, much like the weight classes in a weightlifting or boxing match. It establishes a fair competition by ensuring that athletes are competing against their peers in ability and level of function.

He started his work with Paralympic athletes competing at the Beijing games, continued it in Vancouver and is now headed to London to assess, monitor and educate athletes. Krassioukov and a group of his students will be presenting the results of their work relating to the Beijing and Vancouver Games at the International Spinal Cord Society annual meetings in London, September 3-5th.


- More about the Canada Foundation for Innovation at: www.innovation.ca