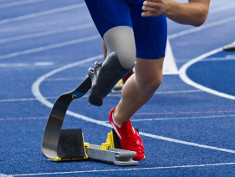 The Paralympics Games 2012 have been a big sport event all over the world; © mezzotint123rf/
panthermedia.net

The London 2012 Paralympic Games led to greater confidence and less anxiety in talking about disability and disabled sport, a Bournemouth University (BU) study has found.

The study was commissioned by Channel 4, broadcasters of the 2012 Paralympic Games, and was completed by staff and students from the Corporate and Marketing Communications group in BU’s Media School. They found that viewers were genuinely surprised by how emotive and thrilling the games were, and began to see sporting excellence rather than only the disability. Over the course of two years they conducted in-depth interviews with participants – based in London, Bournemouth and Newcastle – about their thoughts and experiences of disability and disabled sport.

“The focus was on experiences and the stories that people had,” said Dan Jackson, senior lecturer in Media and Communication at BU, who helped coordinate the study. “We wanted to speak to a whole cross-section of people, so the interviews included disabled people, people with direct experience of disability and disability sport, people with an interest in sport and TV watching, and people who had no interest at all. We were most interested in how this massive sporting event impacted on people’s lives.”

The participants were interviewed in four phases before and after the London 2012 Paralympic Games, and Dan said that, before the event, there did not seem to be much change in the way people were talking about disability and disabled sports.

“There were a lot of barriers - people didn’t know how to talk about it,” he said. “Many people did not have experiences of disability because it was very rarely on our screens. There was not a great deal of knowledge or interest in Paralympic sport. But there seemed to be a lot of good will towards it - people saying ‘It should be on TV, it’s a worthwhile thing, but I won’t really go out of my way to watch it’.”

However, after the London 2012 Paralympic Games, people’s perceptions and experiences of disability and disabled sport seemed to change.
The study found:
• The Paralympics had a noticeable impact on the way disability was talked about; there was greater confidence and less anxiety in talking about disability sport.
• Genuine and palpable surprise at the emotional reactions generated by watching the Paralympics – viewers seemed genuinely surprised at just how emotive and thrilling the Paralympics were.
• A shift from expecting to see only the disability to primarily seeing sporting excellence. This was accompanied by a shift away from sympathy and pity to thrill and excitement associated with watching live sport
• A reduction in expressed sense of discomfort when watching people with disability on TV.
• Disabled participants were acutely aware of the ‘buzz’ generated that made disability momentarily trendy and fashionable, and that a general sense of ‘admiration’ appears to have displaced sympathy, pity or fear in how able-bodied people interact with disabled people. But they were sceptical of whether this would last long-term.

“We couldn’t find anyone who hadn’t experienced any of the Paralympics – even if they hadn’t watched it directly, it was second-hand through the news or other people,” said Jackson. “While the summer of sport, particularly the Olympics, was quite moving for the whole country, it had a huge impact and was the central focus all summer, and the Paralympics benefited from that.But for some people it suffered, as it seemed to be considered an afterthought.”

He added: “Some of the people who were least likely to watch and enjoy it, got beyond that and beyond the disabilities and were watching it as a sport just like any other sport.”

Jackson said it was great to be involved with such a high profile project, and that they were now hoping to write a book around the findings. “One of the great parts of it from our point of view was that it was a really good project that involved so many people in our department,” he said. “The 2012 Olympics and Paralympics were massive for the country and it only seemed to really hit home when we started quite how big a deal this whole thing was. To be part of that and doing the research on that was great.”