Paralympics Rio 2016: New law hailed as a landmark in Brazil 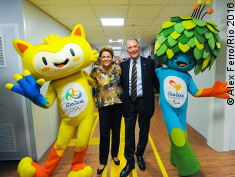 With just over one year to go until the Rio 2016 Paralympic Games, Brazilian President Dilma Rouseff has signed off new legislation which will improve the lives of the Brazil’s almost 50 million people with an impairment and lead to increased funding in para-sport. The Inclusion of People with Disabilities Act will change the lives of people with an impairment in Brazil and will lead to increased funding in para-sport.

The Inclusion of People with Disabilities Act eliminates accessibility barriers in transport, housing, services, education, sport and the exercise of citizenship. The new law also states that 2.7 per cent of the gross revenues of the federal lotteries should be invested in sport, up from the current level of 2 per cent.

Of this investment, the Brazilian Olympic Committee should receive 62.96 per cent and the Brazilian Paralympic Committee (CPB) 37.04 per cent, a significant increase as CPB currently receives 15 per cent of the transfer of lottery revenues. This increase is the result of CPB’s effort working together with members of the Brazilian parliament and it will mean that from the current EUR 23 million euro CPB’s annual budget will reach an annual amount of EUR 43 million.

"It is an extraordinary achievement for the Paralympic Movement. It is a guarantee of rights, making the disabled person a first-class citizen in this country. In the case of Paralympic sport, it significantly increases the volume of resources. It means we can create a more structured pathway for para-athletes in Brazil, providing better conditions from the grassroots right through the high performance level," Rouseff said.

"It will also benefit the new Training Centre being built in Sao Paulo, by ensuring we don’t just build it but manage it with resources in the long-term. We are preparing for a new era: a fantastic one in 2016, with more resources and with a new Training Centre for the Paralympics. I think the future of Paralympic sport, especially after this law, is brilliant," added Parsons, who is also Vice President of the International Paralympic Committee.

Vice President of the Brazilian Paralympic Committee and former football 5-a-side player, Mizael Conrado hailed the new Inclusion of People with Disabilities Act as a landmark.

"It aligns Brazilian legislation to the UN International Convention," he said. "The law will surely bring equality of opportunity for all people with disabilities who still find themselves on the margins of the process. For sport, it brings sustainability as desired by athletes and the Paralympic community."

Brazil's performance in Paralympic sport has been improved substantially at every edition of the Paralympic Games. In London 2012, Brazil finished an unprecedented seventh overall in the medals table and is targeting a top five finish at Rio 2016.

More about NPC Brazil at: www.paralympic.org/brazil