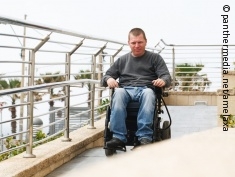 Improving accessibility in Rio for the Paralympics 2016 is very important for athletes, fans and people living in Rio; © panthermedia.net/amelaxa

Rio de Janeiro’s municipal government has announced an initiative to improve accessibility to major tourist points across the city for people with a disability, ahead of the Rio 2016 Olympic and Paralympic Games.

The "Projeto Rotas Acessíveis" (English: Accessible Routes Project) will see 4,000m² of accessible pavements and 5,831m² of concrete resurfacing undertaken at the entrances to 10 popular Rio locations, among them Sugarloaf Mountain, Corcovado (the mountain that hosts Christ the Redeemer) and Copacabana beach.

Presenting the plans on 15 September, Rio mayor Eduardo Paes said the project aimed to prepare the city to host next year’s Games, especially for athletes and fans with a disability, as well as improving life for the city’s residents. "If the Paralympic Games are an opportunity, it is this chance to bring attention to this issue that needs resolving in our city," said Paes.

The project was launched at the Palácio da Cidade (City Palace) at an event attended by some of the Brazilian Paralympic team who topped the medal table at the recent Parapan American Games in Toronto.

The improvements will include the levelling of pavements and roads, installation of ramps and tactile flooring, the removal of obstacles, and improvements to bus stops and car parking areas. The work, which will cost R$ 3.5 million (US$ 914,000), will start in October and is scheduled to last six months.

The other areas that will be improved are: Barra da Tijuca beach, Praça XV, Paço Imperial, Cinelândia, Jardim Botânico, Vista Chinesa and Mesa do Imperador.