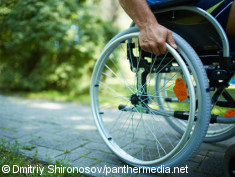 People paralyzed by spinal cord injuries lose mechanical strength in their leg bones faster, and more significantly, than previously believed, putting them at greater risk for fractures from minor stresses, according to a new study by a research team at Worcester Polytechnic Institute (WPI).

The results suggest that physicians need to begin therapies for spinal cord injury patients sooner to maintain bone mass and strength. The data also serve as warning to physicians treating patients with osteoporosis to think beyond the standard bone density test when assessing risks of hip and other fractures.

"It's not just a question of how much bone mass is lost, but where that loss is occurring," said Karen Troy, assistant professor of biomedical engineering at WPI and senior author of the paper. "We found that bone-loss occurred sooner in mechanically important areas and significantly increased the risk of fracture."

Estimates of the number of Americans living with spinal cord injuries range from 300,000 according to the National Spinal Cord Injury Statistical Center to 1.2 million in a study funded by the Christopher and Dana Reeve Foundation. Both sources agree that the leading causes of these injuries are car accidents, workplace accidents, falls, sports injuries, and violent crime.

Healthy bones adapt to the mechanical forces they encounter, with new bone formation and existing bone resorption constantly occurring to meet the body's needs. When bones stop carrying loads, however, they begin to lose mass and weaken. For patients with spinal cord injuries, this dramatic decline in bone strength often causes broken legs or knees from otherwise minor impact or stresses. "Their bones are so fragile, that just the act of rolling over in bed can snap their knee or leg," Troy said.

In the current study, Troy and her co-authors, W. Brent Edwards at the University of Calgary and Thomas Schnitzer at Northwestern University, captured and analyzed data from 13 spinal cord injury patients treated at the Rehabilitation Institute of Chicago. Each patient received two standard scans (a DXA bone mineral density scan and a CT scan) of their leg bones at specified time intervals for nearly four months after the original injury. The scans documented the change in bone mass over time. The team then used sophisticated computer modeling systems to process the scan data and simulate how the amount and distribution of bone loss would affect the ability to sustain mechanical loads and movements.

That analysis showed that patients in the study lost 2 percent of their leg bone mass each month, yet that correlated with a 6.9 percent loss in leg bone strength. "In just 3.5 months, reductions in strength for some patients were on the order of that predicted for lifetime declines owing to aging," the authors wrote.

Starting therapies early to maintain bone mass and strength is important for these patients, Troy noted, not only to prevent injuries but also to keep patients eligible for treatments and technologies now in development. "In ten or fifteen years, with advances in tissue regeneration to repair the spinal cord, and exoskeleton assist devices, many of these people will have the opportunity to get back on their feet, if their bones are strong enough to carry the load," Troy said. "It's very difficult to restore bone mass once it's lost, so the better approach is to prevent the loss in the first place."

Bone loss and the risk of fracture is also a serious concern for the 54 million people in the United States who have low bone density or osteoporosis. The three-fold difference observed in bone mechanical strength versus density in the current study should prompt additional review of how physicians assess risk and treat patients with this condition. "Bone mineral density is important, but it doesn't tell the whole story," Troy said.

More about the Worcester Polytechnic Institute at: www.wpi.edu