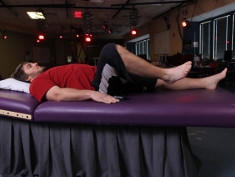 Four people with paraplegia are able to voluntarily move previously paralyzed muscles as a result of a novel therapy that involves electrical stimulation of the spinal cord, according to a study funded in part by the National Institutes of Health and the Christopher & Dana Reeve Foundation.

The participants, each of whom had been paralyzed for more than two years, were able to voluntarily flex their toes, ankles, and knees while the stimulator was active, and the movements were enhanced over time when combined with physical rehabilitation. Researchers involved in the study say the therapy has the potential to change the prognosis of people with paralysis even years after injury.

"When we first learned that a patient had regained voluntary control as a result of spinal stimulation, we were cautiously optimistic," said Roderic Pettigrew, director of the National Institute of Biomedical Imaging and Bioengineering (NIBIB) at NIH, which provided support for the study. "Now that spinal stimulation has been successful in 4 out of 4 patients, there is evidence to suggest that a large cohort of individuals, previously with little realistic hope of any meaningful recovery from spinal cord injury, may benefit from this intervention."

One of the most impressive and unexpected findings of the study is that two of the patients who benefited from the spinal stimulation had complete motor and sensory paralysis. In these patients, the pathway that sends information about sensation from the legs to the brain is disrupted, in addition to the pathway that sends information from the brain to the legs in order to control movement. The researchers were surprised by the outcome; they had assumed that at least some of the sensory pathway needed to be intact for the therapy to be effective.

The first person they implanted was unable to move or experience any sensation below his injury and was initially meant to be their baseline patient. "What was astounding about him was that not only was there voluntary movement, but we saw it in the first week of stimulation. We then saw it in the next two patients as well," said Susan Harkema, the director of rehabilitation research at the Kentucky Spinal Cord Injury Research Center at the University of Louisville, and a researcher in the study.

The researchers point to the speed at which each subject recovered voluntary movement as evidence that there may be dormant connections that exist in patients with complete motor paralysis. "Rather than there being a complete separation of the upper and lower regions relative to the injury, it's possible that there is some contact, but that these connections are not functional," said V. Reggie Edgerton, a UCLA distinguished professor of integrative biology and physiology, and the researcher responsible for developing the novel approach to rehabilitation. "The spinal stimulation could be reawakening these connections."

An important aspect of the new study involved assessing the ability of each patient to modulate his movements in response to auditory and visual cues. "We hoped to determine if they could voluntarily move in the presence of stimulation, and also how controlled they could be about their movements," said Angeli.

All participants were able to synchronize leg, ankle, and toe movements in unison with the rise and fall of a wave displayed on a computer screen, and three out of the four were able to change the force at which they flexed their leg, depending on the intensity of three different auditory cues.

"The fact that the brain is able to take advantage of the few connections that may be remaining, and then process this complicated visual, auditory, and perceptual information, is pretty amazing. It tells us that the information from the brain is getting to the right place in the spinal cord, so that the person can control, with fairly impressive accuracy, the nature of the movement," said Edgerton.

The same tests were also administered following several months of spinal stimulation applied in conjunction with locomotor training. During this time, patients also carried out home-based training, which consisted of hour-long stimulation while practicing intentional movements lying down. At the end of the training, some subjects were able to execute voluntary movements with greater force and with reduced stimulation, while others experienced enhanced movement accuracy. Harkema says it's unclear whether the improvement was a result of the training or due to the cumulative effects of stimulation over time. They plan to test this distinction in their next study.

More about the NIH/National Institute of Biomedical Imaging & Bioengineering at: www.nibib.nih.gov