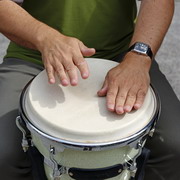 The study participants walked to
a metronomic beat, produced by
way of visuals, sound, or touch;
© panthermedia.net/H. Witthake

Walking to a beat could be useful for patients needing rehabilitation, according to a study. The findings demonstrate that researchers should further investigate the potential of auditory, visual, and tactile cues in the rehabilitation of patients suffering from illnesses like Parkinson's.

Together with a team of collaborators from abroad, Ervin Sejdic, an assistant professor of engineering in Pitt's Swanson School of Engineering at the University of Pittsburgh, studied the effects of various metronomic stimuli (a mechanically produced beat) on fifteen healthy adults, ages 18 to 30. Walkers participated in two sessions consisting of five 15-minute trials in which the participants walked with different cues.

"We found that the auditory cue had the greatest influence on human gait, while the visual cues had no significant effect whatsoever," said Sejdic. "This finding could be particularly helpful for patients with Parkinson's disease, for example, as auditory cues work very well in their rehabilitation."

Sejdic said that with illnesses like Parkinson's disease, a big question is whether researchers can better understand the changes that come with this deterioration. Through their study, the Pitt team feels that visual cues could be considered as an alternative modality in rehabilitation and should be further explored in the laboratory.

"Oftentimes, a patient with Parkinson's disease comes in for an exam, completes a gait assessment in the laboratory, and everything is great," said Sejdic. "But then, the person leaves and falls down. Why? Because a laboratory is a strictly controlled environment. It is flat, has few obstacles, and there are not any cues (like sound) around us. When we are walking around our neighborhoods, however, there are sidewalks, as well as streetlights and people honking car horns: you have to process all of this information together. We are trying to create that real-life space in the laboratory."


- More about the University of Pittsburgh at: www.pitt.edu