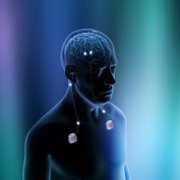 Researchers from the University of Florida and 14 additional medical centres reported results that deep brain stimulation — also known as DBS — is effective at improving motor symptoms and quality of life in patients with advanced Parkinson's disease.

The study tested the safety and effectiveness of a constant current DBS device developed by St. Jude Medical to manage the symptoms of Parkinson's disease. The device aimed to reduce tremors, improve the slowness of movement, decrease the motor disability of the disease and reduce involuntary movements called dyskinesia, which are a common side effect of Parkinson's drugs.

After treatment, analysis of 136 patient diaries revealed longer periods of effective symptom control — known as "on time" — without involuntary movements. "On time" for patients who received stimulation increased by an average of 4.27 hours compared with an increase of 1.77 hours in the group without stimulation. Patients also noted overall improvements in the quality of their daily activities, mobility, emotional state, social support and physical comfort.

"I think it is safe to say since dopamine treatment emerged in the 1960s, DBS has been the single biggest symptomatic breakthrough for Parkinson patients who have experienced the fluctuations associated with levodopa therapy," said Michael S. Okun. "This study validates the use of mild electrical currents delivered to specific brain structures in order to improve Parkinson's disease in select patients with advanced symptoms, and additionally, it explored a new stimulation paradigm. Future improvements in devices and the delivery systems for DBS will hopefully provide exciting new opportunities for Parkinson's sufferers."

All patients were followed for 12 months. The deep brain stimulation procedure involves surgeons implanting small electrodes into an area of the patient's brain that controls movement. The electrodes are connected to a device precisely programmed to use mild electrical current to modulate problematic brain signals that result in movement problems.

"The study answered some very important questions concerning cognition and mood with lead implantation (alone) versus implantation with stimulation. It also refutes the hypothesis that DBS increases depressive symptoms," said Gordon H. Baltuch. "The group's results also showed a decrease in the infection rate to 4 per cent from previously published 10 per cent. It shows that American neurosurgeons and neurologists with their industry partners are improving the safety of this procedure and working in a collaborative fashion."


- More about the University of Florida at: www.ufl.edu