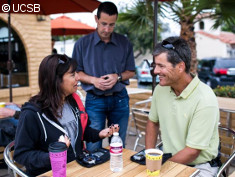 For parents of children with Type 1 diabetes, the stress is amplified. Childrens' unpredictable eating habits and food preferences, spontaneous physical activity and sensitivity to insulin require parents to be extra vigilant. Over the past 12 years, Frank Doyle, director of the Institute for Collaborative Biotechnologies at UC Santa Barbara (UCSB), and his research group have developed an artificial pancreas, a combination of sensor technology and insulin pump, which, thanks to a control algorithm, reads levels of glucose and injects the appropriate amount of insulin based on the data, and the patient's individual characteristics.

"I think one of the most important things we can do is alleviate parents' fears of overnight hypoglycemia," said Eyal Dassau, a research engineer in UCSB's Department of Chemical Engineering and the principal investigator on this study. "As a result, parents can get a full night's sleep without having to worry what might happen at 4 a.m., or who's awake to check their child's glucose. That would be a big success."

Thus far, the researchers have made great strides in developing UCSB's AP for use in adults. Tailoring the device to manage pediatric diabetes, however, requires the researchers to consider an additional set of factors. "Children have unpredictable eating habits," said Dassau. "You can put a certain amount of food in front of them, but you don't know whether they're going to eat it all."

Additionally, they may graze throughout the day, and tend to be more spontaneous than adults with their physical activity. Also coming into play are the children's general lack of awareness about their condition and their limited ability to inform parents and caregivers of any immediate health situations.

The protocols for diabetes management vary by age as well. With adults and teenagers who can predict their meals and mealtimes, insulin can be delivered subcutaneously about 15 minutes before eating to ensure an adequate amount of the hormone has reached the bloodstream by the time they eat. This "pre-meal bolus" is an ideal way to manage meal glucose control, as it allows insulin to be absorbed when the glucose surge arrives with the meal, and mimics as closely as possible the way a healthy individual's body regulates blood sugar.

However, in younger children with Type 1 diabetes, because of unpredictable eating habits and higher sensitivity to insulin, the hormone must be delivered after the meal, which creates both a delay and the chance of a swing to the hypoglycemic extreme of the blood sugar range, due to the tendency to overcompensate.

According to the researchers, the first phase of research for the pediatric AP involves data collection. With clinical expertise from Dr. Stuart Weinzimer, a pediatric endocrinologist, professor at Yale School of Medicine and a leading expert on Type 1 diabetes in children, the researchers will tune the AP's Zone MPC (model predictive control) algorithm to meet the specific challenges of managing pediatric diabetes.

"I would look for the following things in a pediatric version of an AP: safety above all; efficacy; reliability; and ease of use," said Weinzimer. In addition to protecting against constant wild swings in blood sugar, which would in turn alleviate the high rates of anxiety, depression, and burnout in parents, and prevent the additional problem of disrupted psychosocial development in children with Type 1 diabetes he said, the device itself must perform in a predictable manner and not be overly complicated or burdensome to use.

"We've already developed safety algorithms for hypo- and hyperglycemia that can be adjusted for young children," said Dassau, adding that bringing this design to the younger population of Type I diabetes patients would ease the burden on parents who worry about the extra cookie or surprise sugary treat. Because insulin requirements change as the child gets older, the algorithm will be adjusted and refined according to different age groups, the researchers noted.

The second phase of the project involves developing and in-clinic testing of an advisory system and an alert system for parents that both provides insight on strategies for the management of their children's conditions in general, and informs them of impending hypo- or hyperglycemia.

At every phase, the researchers will conduct repeated evaluations and refinements to the algorithm as well as to the alert and advisory systems. The goal is to give parents and children the ability to be involved in the management of diabetes to the extent that they can be, while safeguarding against extremes when unexpected circumstances arise. Snacking, unscheduled naps, spur-of-the-moment activities or missed meals will no longer result in increased stress levels for both parents and children.

In future studies, pediatric AP testing will move to an outpatient component, in which subjects are given free rein over what they eat and do, but at locations near the clinic, with supervision from technical staff. "But the home is where we want to get," said Doyle, "with the normal routine, with no interference or intrusion. The true end-game is at home."

More about te University of California - Santa Barbara at: www.ucsb.edu