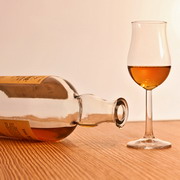 Risks of problem drinking are on
the rise among women;
© panthermedia.net/Heiko Eschrich

Researchers also found that the gender gap in alcoholism and problem drinking is narrowing in many countries.

"The literature on alcohol consumption indicates that younger birth cohorts, especially women, are increasingly at risk for the development of alcohol use disorders," said Katherine M. Keyes of the Department of Epidemiology at the Mailman School.

"Given that alcoholism among women is increasing, there is a need for specific public health prevention and intervention efforts. Further, results suggest the environment increases the risk for alcoholism. While genetics play a substantial role, the generational differences between those born before and after World War II indicate that factors in the environment such as policies, laws, social norms, availability, and broader social context also contribute substantially to the underlying risk for alcohol use disorders in the population."

Although younger birth cohorts in North America, especially those born after World War II, are more likely than other cohorts to engage in heavy episodic drinking and develop alcoholism and/or binge drinking, this effect was not found in Australia and Western Europe. The investigators note that the United States differs from Europe and Australia in that we have a fairly large number of people who do not drink at all, although over time, the number of non-drinkers in the United States decreasing.

"The results on gender highlight the need for increasing research on the social aetiology of alcohol use disorders," noted Keyes. "Traditionally, gender differences are explained by biological differences in the ability of the body to metabolize alcohol and other biological mechanisms. These results suggest that the magnitude of gender differences changes over time, highlighting an important role for societal factors."

The review is among the first to look at many individual studies on alcohol use disorders and provides evidence that problem drinking among young women is still increasing, an important finding for public health professionals to note. The authors point out the importance of making young people aware that heavy drinking poses unique health and social risks for women. Because of differences in average body size, for example, a woman becomes more intoxicated than a man consuming the same quantity or alcohol. Women who drink heavily also face a greater vulnerability to sexual violence and greater risks of chronic diseases.


- More about the Columbia University's Mailman School of Public Health at: www.mailman.columbia.edu