People with MS may be more physically fit than tests indicate 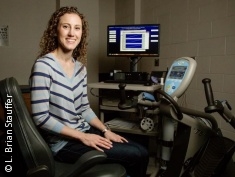 Conventional methods of assessing cardiorespiratory fitness and muscular strength among people with Multiple Sclerosis (MS) may underestimate participants' capabilities, prompting clinicians to prescribe exercise therapies that are less effective than they could be, according to new research by scientists at the University of Illinois.

In a study of 64 patients with MS, kinesiology and community health professor Lara Pilutti and her colleagues found that participants had significantly higher peak aerobic capacity and muscle strength when recumbent steppers and computerized dynamometers were used for the tests, compared with arm ergometers and handheld dynamometers.

Participants' muscle strength ranged from 60 to 173 percent greater, depending on the leg muscle group tested, when measured with a computerized dynamometer versus a handheld device. Accordingly, participants' peak aerobic capacity was 32 percent greater when tested with a recumbent stepper versus an arm ergometer, an upper-body exercise machine that is similar to pedaling a bike with one's hands.

Computerized dynamometers measure the amount of torque or muscle force that users exert to move a lever with their legs. The accuracy of handheld dynamometers in muscle-strength testing has been challenged in prior research because the results can vary greatly, depending on the strength of the person administering the test and providing the resistance as the participant pushes against the device, Pilutti said.

Participants in the study ranged in age from 18 to 64 and had mobility disabilities from MS that varied from mild to severe.

Published in the Journal of Neurologic Physical Therapy, the paper is believed to be the first study to evaluate the use of computerized dynamometers in testing strength deficits in people who have severe mobility impairments from advanced MS.

People who have the most significant disability from the disease frequently are excluded from research studies, either because facilities lack the necessary adaptive equipment or because of other barriers to exercise participation, such as transportation problems.
However, people with the most disabling symptoms could reap great benefits from exercise training, Pilutti said. For the 2.5 million people worldwide who have MS, appropriate exercise can help manage many symptoms of the disease, including fatigue, muscle weakness and problems with balance and coordination.

Sedentary behavior is a significant health threat among people with MS, who, like their counterparts in the general population, spend an average of about eight hours each day sitting, the researchers found.

"We know there are some serious health consequences in terms of morbidity and mortality, so inactivity is a pretty significant issue," Pilutti said. "We need to develop some interventions for both people with MS and in the general population to get everyone to be more active. But that's going to be a challenge for people who have more severe mobility disabilities."

More about the University of Illinois at Urbana-Champaign at: www.illinois.edu