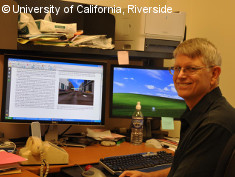 Older adults whose vision is affected by declining contrast sensitivity – which is a factor in the ability to detect and resolve details in low light – can improve their ability to see with perceptual learning training, according to researchers at the University of California, Riverside and Brown University.

The researchers also found, to their surprise, that the perceptual learning task aimed at improving contrast sensitivity improved visual acuity as well for older and younger adults after only five days of training. The results have major implications for older adults, particularly those over age 65, for whom declines in contrast sensitivity have been associated with greater risk of falls and vehicle crashes.

Contrast sensitivity is one of the first age-related declines in vision to appear, and numerous studies have suggested the problem may result from changes in the visual cortex of the brain rather than in the eye itself or from disease.

"This is important because sensitivity to subtle changes in contrast is a significant issue for older individuals, and age-related declines in contrast sensitivity can be critical for many real-life tasks such as driving at night," DeLoss said.

Building on nearly a decade of research in Andersen's Visual Cognition and Human Performance Lab – the primary lab in the U.S. to focus on the use of perceptual learning to counteract age-related declines in vision – the team tested UC Riverside students and individuals age 65 and older using low-contrast stimuli on a computer screen.

Using highly specialized eye-tracking equipment calibrated to each individual in the study, the researchers also measured pupil diameter to determine if allowing more light onto the retina contributed to improvement in vision. Pupil size was found to be related to only a small amount of the improvement seen.

Contrast sensitivity among older adults in the study improved so much that their performance was not statistically different from that of younger adults before training, Andersen said. Both groups experienced significant improvement in visual acuity as well.

"We didn't expect that at all," Andersen said, adding that he was so surprised by the improvement in visual acuity that DeLoss doubled the number of participants in the study to see if the results could be replicated. They were.

DeLoss said that while the team suspected that contrast sensitivity training might produce changes in other aspects of vision, such as acuity, "we did not expect such significant changes in acuity with only five days of training. We found an average improvement of roughly three letters using a standard acuity test. Five letters would be equivalent to moving down a line on a standard chart-based vision test that you typically see at an optometrist's office."

The researchers concluded that "the visual system among older adults is very plastic and has the ability to improve, and that perceptual learning can be used to counteract age-related declines in contrast sensitivity," Andersen said. "These improvements are the result of changes in sensory processing and not due to optical efficiency of the eye."

"We hope that we can continue this line of research in the future and that it will eventually allow us to create interventions that can be used by the general public to counteract age-related declines in vision," DeLoss added.

More about the University of California – Riverside at: www.ucr.edu