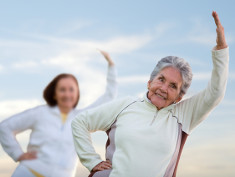 Older women who had set exercise as one of their personal goals were more likely to exercise actively; © Andres Rodriguez/panthermedia.net

Although exercise may significantly promote healthy aging, many older adults remain sedentary. Based on a study conducted in the Gerontology Research Center at the University of Jyväskylä, one reason for this may lie behind older adults’ personal goals.

“We noticed that those older women who had personal goals related to their own or other people’s health, or to independent living, less frequently set exercise as one of their personal goals. Thus it seems that when life situation requires focusing goals on health issues or simply managing daily life at home, people may not have the energy to strive for exercise activity,” says doctoral student Milla Saajanaho from the Gerontology Research Center.

“When we are trying to promote older adults’ exercise activity, we should always take into account their individual life situation, which may require focusing on other things in life instead of exercising. By considering all personal goals a person has, we could also find ways to include exercise into his/her life. And as so many older adults have personal goals related to health, it would be beneficial to remember that striving for exercise is also beneficial for maintaining health and functioning,” Saajanaho concludes.

More about the Academy of Finland at: www.aka.fi