Personality Affects How Likely We Are to Take Our Medication 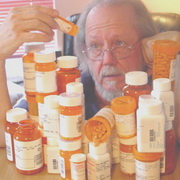 Conscious people are more likely
to stick to their medication; © SXC

The results of a unique study from the University of Gothenburg, Sweden, show that personality has an impact on how likely people are to take their medication.

The study was based on 749 people with chronic diseases who responded to a questionnaire on medication adherence behaviour, in other words whether they take their medicine. Their personalities were also assessed using another questionnaire which comprises 60 statements with five different responses. The questionnaire was based on five personality traits: neuroticism, extroversion, openness to experiences, agreeableness and conscientiousness.

A person who is greatly influenced by conscientiousness can be described as target-oriented and structured. In the study this tied in well with how this type of person approached their medication as they were careful to follow the doctor's prescription. However, the personality trait of neuroticism can mean that a person is fairly anxious which, according to the study, had a negative impact on taking medication.

The researchers' results show that high scores for both of these personality traits can lead to lower levels of adherence. The same trend was evident when it came to agreeableness, which had a positive correlation with taking medication as prescribed.

"If the person with the trait of agreeableness also had a low score for conscientiousness, and is thus less methodical, this seemed to have a negative effect on medication adherence," says Malin Axelsson.

Her explanation for this is that people with high scores for conscientiousness are perhaps more likely to stick to their medication on account of a more structured temperament. On the other hand, those with low scores for the same personality trait can be described as slightly more unstructured and perhaps less inclined to introduce an element of routine into taking their medication.

"Both types may need different kinds of education and/or support," says Axelsson. "As such, it may be important to take different dominant personality traits into account when treating patients with chronic diseases. The results of similarly formulated interview questionnaires could help people to become more aware of their medication and access more tailored support and/or education from healthcare professionals."


- More about the University of Gothenburg at www.gu.se