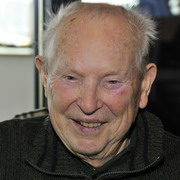 Researchers at Albert Einstein College of Medicine have found that personality traits like being outgoing, optimistic, easygoing, and enjoying laughter as well as staying engaged in activities may also be part of the longevity genes mix.

"It is in their genes" is a common refrain from scientists when asked about factors that allow centenarians to reach age 100 and beyond. Up until now, research has focused on genetic variations that offer a physiological advantage such as high levels of HDL ("good") cholesterol.

The findings come from Einstein's Longevity Genes Project, which includes over 500 Ashkenazi Jews over the age of 95 and 700 of their offspring. Ashkenazi (Eastern European) Jews were selected because they are genetically homogeneous, making it easier to spot genetic differences within the study population.

Previous studies have indicated that personality arises from underlying genetic mechanisms that may directly affect health. The present study of 243 of the centenarians (average age 97.6 years, 75 per cent women) was aimed at detecting genetically-based personality characteristics by developing a brief measure (the Personality Outlook Profile Scale, or POPS) of personality in centenarians.

"When I started working with centenarians, I thought we could find that they survived so long in part because they were mean and ornery," said Doctor Nir Barzilai. "But when we assessed the personalities of these 243 centenarians, we found qualities that clearly reflect a positive attitude towards life. Most were outgoing, optimistic and easygoing. They considered laughter an important part of life and had a large social network. They expressed emotions openly rather than bottling them up." In addition, the centenarians had lower scores for displaying neurotic personality and higher scores for being conscientious compared with a representative sample of the U.S. population.


- More about the Albert Einstein College of Medicine at: www.einstein.yu.edu