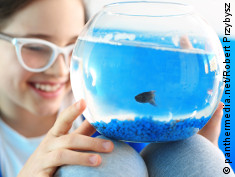 "Teenagers are one of the most difficult patient populations to treat, mainly because of the many psychosocial factors associated with that stage of life," said the study's senior author Dr. Olga Gupta, assistant professor of pediatrics and internal medicine at UT Southwestern, who treats patients at Children's Medical Center Dallas. "We learned that instructing families to associate regular pet fish care with the child's standard diabetes care significantly improved their hemoglobin A1C levels."

The study, which appears in The Diabetes Educator, followed the pet care and diabetes management tasks of 28 adolescents ages 10 to 17 with Type 1 diabetes mellitus.

Study participants selected for the intervention group were provided a fish (Betta splendens), a fish bowl, instructions for caring for the fish, and recommendations to set up the fish bowl in their bedroom, if possible. They were instructed to feed their fish in the morning and in the evening, checking their own blood glucose level each time. Then, they were asked to change one-fourth of the water in the fish bowl once a week and review their own blood glucose logs with a caregiver.

"He never had the opportunity to have a pet, and if it meant helping him improve his blood sugar, then I was all for it," said Jeanette Claxton, mother of 12-year-old Raymon Miles, Jr., a participant in the study. "Throughout the entire experience we owned two fish that became part of our family. The first fish was named Bob, and Raymon would feed him, read to him, and even watch TV with him," said Claxton. "He didn't even realize that he was talking about his diabetes more and taking his blood sugar more often."

"I would recommend this approach to other families because it creates ownership not just of the fish, but ownership of your diabetes. When you own it, diabetes doesn't own you," she said.

After three months, the intervention group's A1C levels decreased 0.5 percent in comparison to their peers in the control group, who experienced a 0.8 percent increase in A1C levels. While a decrease in blood glucose levels was seen in all ages, the benefits of the behavioral intervention were more pronounced in the study's younger participants.

"The decrease was greater in the adolescents ages 10 to13," said Gupta, Dedman Family Scholar in Clinical Care. "Children in this age group are often beginning to seek independence from their parents, and were more eager to care for the fish than some of the older adolescents."

Findings from the study also suggest the importance of parental involvement in helping the adolescents establish a routine that monitors their blood glucose levels regularly. Next steps include studying a group of adolescents for a longer period of time, as well as identifying the specific mechanisms that led to the glycemic improvement, such as type of pet, mood, conscientiousness, routine, or level of parental involvement.