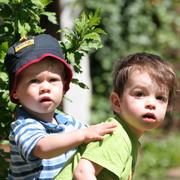 Behavioural problems were
measured by asking mothers of
1.5 till 5-year-old children;
© panthermedia.net/Ralf Winter

A study by researchers at Columbia University's Mailman School of Public Health heightens concerns over the potential health effects on children of a group of ubiquitous chemicals known as phthalates. Phthalates are a class of chemicals that are known to disrupt the endocrine system, and are widely used in consumer products ranging from plastic toys, to household building materials, to shampoos.

Recent studies of school-age children have provided preliminary links between prenatal exposure to phthalates and developmental problems. The study is the first to examine prenatal phthalate exposure and the prevalence of mental, motor and behavioural problems in children who are in the preschool years.

The study evaluated associations between prenatal exposures to these phthalates and child mental, motor and behavioural development at age 3 years.

The scientists used the Bayley Scales of Infant Development II, a well validated developmental test, to assess the mental and motor development of the children. Behavioural problems were measured by asking mothers to complete the widely used 99-item Child Behaviour Checklist (for ages 1.5 - 5 years).

Overall, researchers found that higher prenatal exposures to two of the phthalates significantly increased the odds of motor delay, an indication of potential future problems with fine and gross motor coordination. Among girls, one of the phthalates was associated with significant decreases in mental development.

Prenatal exposures to three of the phthalates were also significantly associated with behaviour problems including emotionally reactive behaviour, anxiety/depression, somatic complaints and withdrawn behaviour. These effects differed somewhat by child sex but were statistically significant among both boys and girls.

"Our results suggest that prenatal exposure to these phthalates adversely affects child mental, motor and behavioural development during the preschool years," said Dr. Whyatt, who is also professor of clinical Environmental Health Sciences. "The results add to a growing public health concern about the widespread use of phthalates in consumer products."