Physical Exercise in the Fight against Osteoporosis 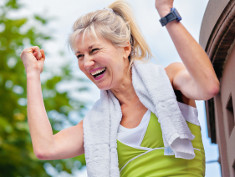 Montserrat Otero, PhD holder in Physical Activity and Sports Sciences of the UPV/EHU-University of the Basque Country, has designed a physical exercise program which is based on very basic, rudimentary materials and which significantly improves upper and lower limb strength as well as static and dynamic balance in women with postmenopausal osteoporosis.

Osteoporosis is a disorder of the bone structure characterized by an alteration in bone resistance, which increases a person's risk of sustaining fractures. In the case of women, the natural tendency is to start losing bone for the first time after the age of 35. After the menopause, an acceleration of this loss may also occur.

One of the main difficulties in diagnosing this disease is that the loss of bone mass that takes place in osteoporosis is progressive and causes no pain. The bone becomes so fragile that the slightest injury can cause a fracture. That is why most people are not aware they have weakened bones until they sustain a fracture. And it is at that moment, when the disease causes bone deformities, that pain and various chronic alterations kick in.

One of the main steps encouraged by the various government organizations in the fight against osteoporosis, and supported by scientific evidence, focuses on preventing falls by doing physical exercise. But one of the biggest drawbacks of the organizations when it comes to activating physical exercise programs geared towards individuals of this type is the economic aspect.

There are very few studies that support this and very few that have also statistically managed to achieve significant improvements using very basic materials rather than sophisticated machinery, which is sometimes inaccessible due to the economic cost involved. This is precisely the aim that Montserrat Otero set herself in her PhD thesis: to establish whether a program of physical exercise using basic materials (bottles filled with sand, marbles and stones, ropes, chairs) can improve the strength of the upper and lower limbs and the static and dynamic balance of women with postmenopausal osteoporosis. Physical exercise that mainly aims to improve the levels of muscular strength and balance. since low levels of these components in physical fitness have been identified as risk factors in falls.

So Otero studied 68 women with postmenopausal osteoporosis between the ages of 50 and 72, of whom 34 were randomly assigned to the Exercise Group and 34 to the Control Group. The participants in the Exercise Group followed a supervised program of physical exercise involving strength and balance training. This program lasted six months in which there were 72 sessions each lasting 60 minutes, in which between 5 and 8 balance exercises and between 8 and 12 strength exercises were done per session. The Control Group did not participate in the program of physical exercise, although they did do the strength and balance tests beforehand and afterwards.

At the start of the program there were no significant differences in the two groups in any of the variables. However, following the intervention, the strength of the upper and lower limbs of the groups was markedly different. "Those in the Exercise Group significantly improved their performance in muscular strength of the upper and lower limbs, while those in the Control Group significantly worsened in both variables," explains Otero. With respect to the balance variable, the Exercise Group experienced a significant improvement after the intervention.

Otero has concluded that a program of physical exercise based on low-intensity strength exercises and exercises involving static and dynamic balance, carried out three days per week in one-hour sessions over a 6-month period, leads to significant improvements in muscular strength in the upper and lower limbs and in static and dynamic balance in women with postmenopausal osteoporosis. That is why "if there is no access to sophisticated equipment due to the economic cost involved, today we know that even without it, the risk factors of the main consequence of the disease can be reduced, which are the falls," stresses Otero.

More about Elhuyar Fundazioa at: www.basqueresearch.com