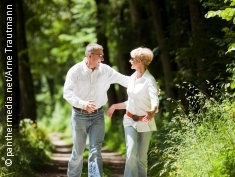 More-fit older adults are more flexible, both cognitively and in terms of brain function, than their less-fit peers; © panthermedia.net/Arne Trautmann

Physically fit people tend to have larger brain volumes and more intact white matter than their less-fit peers. Now a new study reveals that older adults who regularly engage in moderate to vigorous physical activity have more variable brain activity at rest than those who don't. This variability is associated with better cognitive performance, researchers say.

The new findings are reported in the journal PLOS ONE.

"We looked at 100 adults between the ages of 60 and 80, and we used accelerometers to objectively measure their physical activity over a week," said University of Illinois postdoctoral researcher Agnieszka Burzynska, who led the study with Beckman Institute for Advanced Science and Technology director Art Kramer.

The researchers also used functional MRI to observe how blood oxygen levels changed in the brain over time, reflecting each participant's brain activity at rest. And they evaluated the microscopic integrity of each person's white-matter fibers, which carry nerve impulses and interconnect the brain.

"We found that spontaneous brain activity showed more moment-to-moment fluctuations in the more-active adults," said Burzynska, who now is a professor at Colorado State University. "In a previous study, we showed that in some of the same regions of the brain, those people who have higher brain variability also performed better on complex cognitive tasks, especially on intelligence tasks and memory."

The researchers also found that, on average, older adults who were more active had better white-matter structure than their less-active peers.

"Our study, when viewed in the context of previous studies that have examined behavioral variability in cognitive tasks, suggests that more-fit older adults are more flexible, both cognitively and in terms of brain function, than their less-fit peers," Kramer said.
The new research highlights yet another way to assess brain health in aging, Burzynska said.

"We want to know how the brain relates to the body, and how physical health influences mental and brain health in aging," she said. "Here, instead of a structural measure, we are taking a functional measure of brain health. And we are finding that tracking changes in blood-oxygenation levels over time is useful for predicting cognitive functioning and physical health in aging."

More about the University of Illinois at Urbana-Champaign at: www.illinois.edu