Physio for the Home 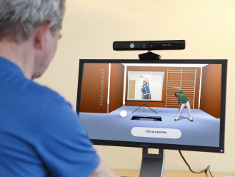 Patients will be able to do their physiotherapy exercises in their own homes; © Fraunhofer FOKUS/Matthias Heyde

Accidents or operations are often followed by long periods of rehabilitation treatment. In future, a new technology will allow patients to do physiotherapy exercises at home, while still making sure that they are performing movements correctly.

Though the skier glides skillfully across the snow-covered landscape, still he stumbles on an icy section of the piste and loses his balance, ending his well-earned winter break in a hospital bed. After the operation, physiotherapy is supposed to help restore mobility. This demands considerable patience and perseverance on the part of the patient. Many people with these sorts of injuries would find it easier to do the exercises at home rather than hanging around the rehabilitation clinic for weeks on end. It’s also important that patients continue to exercise at home following a lengthy stay in hospital.

A new technology has been designed to give future patients added motivation to do their exercises, allowing them to perform physiotherapy exercises at home or when out and about – during breaks at work, for instance. Experts call this telerehabilitation. Underpinning this is a technology developed by researchers at the Fraunhofer Institute for Open Communication Systems FOKUS in Berlin, consisting of an exercise editor, a physio box and a mobile sensor unit that connects to a smartphone.

The therapist uses the exercise editor to work up a training program tailored to the individual patient, increasing the intensity from week to week. The patient can then run the program at home using the physio box, a sort of mini-PC for televisions. The small computer boasts internet connectivity, a camera and a microphone. Exercise routines are displayed on the TV screen for the patient to copy. The physio box analyzes the data recorded by the camera as the patient does the exercises. Beforehand, software is used to map each patient’s bodily characteristics in 3D and translate them into a biomechanical computer model. Once the data has been interpreted, the box sends it via the internet to the rehabilitation center, where the therapist sees how the patient is progressing and can adapt the exercises accordingly.

Alongside measurements of movements, therapists need to know their patients’ vital signs – in other words pulse, oxygen saturation levels and, in some cases, readings from an electrocardiogram. This allows them not only to assess whether the patient is performing exercises correctly but also how much of a strain they are. This is particularly important when dealing with people who have a cardiovascular disease. “In light of this, we also developed a mobile unit,” says Michael John, project manager at FOKUS. “Sensors placed in a chest strap, watch or walking stick measure vital signs like pulse, blood pressure or the quality of the patient’s movement, sending the data to a smartphone.” The therapist can set threshold values using the exercise editor; for example, if a patient’s pulse reaches a level that exceeds the limit set for them, a warning signal is emitted.

On the one hand, the mobile unit serves to complement the physio box, but it is also supposed to help patients in future to do their exercises while on the move – out walking or during office breaks, perhaps. “We’re working on how to get the mobile unit to analyze the patient’s quality of movement as well. To do this, we’re using motion tracking sensors that analyze limb movements in relation to each other and in terms of absolute position,” explains John.

One of the researchers’ priorities when developing each aspect of the new technology was to take into account the needs of patients and physiotherapists as much as possible. As a result, all three components – the exercise editor, the physio box and the mobile unit – were given to patients and therapists for testing in the course of numerous preliminary studies, and modified accordingly. A field test involving a larger group of patients is now due to follow in February 2013, and the system could then be ready for use beginning in summer 2013.