Planning Is Key to a Healthy and Happy Retirement 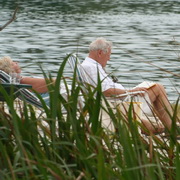 Retirement is often viewed as a
time to relax, travel, participate in
leisurely activities and spend time
with family; © madmaven/SXC

For many older adults, chronic health problems and poor planning often hinder the enjoyment of retirement. Now, a University of Missouri researcher has found that planning for changes in lifestyle and health leads to better retirement for married couples.

Angela Curl, an assistant professor in the School of Social Work, says it is important for couples to plan for retirement, both financially and socially and to consider the changes that may occur in their relationships and day-to-day activities. Communication about retirement with each other and family members and friends makes it easier for couples to adjust to a new routine, Curl says.

"Any time a major life change happens, it is an opportunity for renegotiation of roles within a couple," Curl said. "If a couple wants positive changes to occur in retirement, it is important for spouses to be intentional in negotiating and planning for activities that match their ideals, finances and current health status."

In addition to planning for changes in routine and lifestyle in retirement, it is important to prepare for health problems that may occur later in life.

Husbands reported improved health when their wives retired. Retirement also reduced the risk of cardiac health problems in men, but had no effect on cardiac health in women.

"When wives retire, they may monitor their husbands' health more closely, taking them to the doctor regularly and ensuring they lead a healthy lifestyle," Curl said. "Women traditionally put the needs of everyone else before themselves, a behavior that could put their own health at risk."

To ease the switch from full-time employment into retirement, Curl recommends a gradual transition to working less and maintaining some level of engagement in the workforce. "There are a lot of health benefits to staying employed," Curl said. "Working just a few hours each week can facilitate better health."


- More about the University of Missouri-Columbia at www.missouri.edu